You're only responsible for pissing off the wrong people 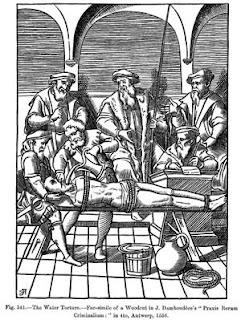 It's been awhile since I took up the topic of torture, but I just got through listening to a BBC report on the CIA torture program.  It included an interview with a retired lawyer who served the CIA in those days, and who continued to insist that what the CIA did was not torture, because "torture" is a legal term.  His words, not mine; with the clear implication that legal terms must be subject to discriminating evaluation and definition, and the definition here was, to paraphrase Nixon:  "If the CIA does it, it's legal."

Torture, in other words, is a meaningless term, because we can redefine it to mean whatever we did wasn't; torture, that is.

This is the definition of torture in the U.S. Code:

the intentional infliction or threatened infliction of severe physical pain or suffering;

the threat of imminent death;

or the threat that another person will imminently be subjected to death, severe physical pain or suffering, or the administration or application of mind-altering substances or other procedures calculated to disrupt profoundly the senses or personality;


The only way around this definition is to redefine any act of "enhanced interrogation" as not threatening death, or causing severe mental pain or suffering.  Thanks to lawyers like the one interviewed by the BBC, the CIA was convinced what it was doing was perfectly permissible; and George W. Bush, in an interview when his autobiography was published, said he relied on his legal advisors to condone the torture that was done under him.  Note he didn't really take credit for it; he said he was told it was okay, so how could you blame him for relying on his advisors?

The man truly is a disgrace.

I seriously doubt the legal memos which justified torture by the CIA would stand up to judicial scrutiny, but thanks to President Obama they'll never have to.

Now, however, some administrators in the CIA may have to answer for what they allowed their agents to do.  Not for the torture, but for covering up the torture; for hiding it from the Senate, for possible criminal actions against the Senate.  It may be we finally see judicial action, finally see legal accountability, not for the violation of U.S. law involving torture, but for the violation of U.S. laws involving disclosure.

It won't be the crime; it may be the coverup.  We can tolerate torture being conducted in our name, under the color of our laws, because we cannot threaten the activities of agents "in the field," even if that "field" is a CIA controlled prison or other site, and the activities are being directed from the White House.

But we cannot allow CIA personnel to lie to the Senate.  That is something up with which the Congress will not put; or the Administration, perhaps.

Thus do we uphold the rule of law; and maintain our moral superiority over the world.  We claim to want justice in the world.  All we want is to be sure nobody fucks with us; and that includes the people who run our agencies.  They can lie to the public; but they'd better not lie to the Congress.