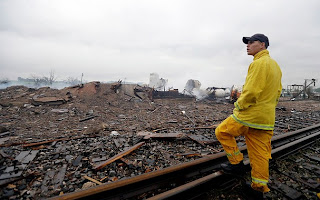 "(People) through their elected officials clearly send the message
of their comfort with the amount of oversight"--Gov. Goodhair


Charlie Pierce is right, the problem in West, Texas is that, well...they need the money.  Which means they need the fertilizer plant.  But the people of West, Texas, aren't quite ready to have that discussion in front of the rest of the world.

Some residents were hesitant to embrace the idea of a new fertilizer plant and declined to speak publicly because of the delicacy of the issue. Mayor Muska said he heard some angry comments when he raised the topic at the town meeting.

"It's too soon to be talking about another plant when the damage from the old one isn't fixed yet," said a middle-aged woman from West who declined to be identified.


This is a small town that lived with the benefits of this plant for 50 years.  One might think, from the overwhelming silence of the townspeople since the blast, that they were ready to rebuild and return to status quo.  Nope, not really:

If a new plant is ever built, it would be made of and concrete with a proper sprinkler system, something the previous plant was lacking, Muska said.


Back in West means, not in the town, though:

"It would be a service to our community if we had another fertilizer plant, but it needs to be located outside of town and maintained properly," said Mimi Irwin, owner of the downtown Village Bakery, which sells Czech pastries called kolaches.


You don't get the sense people in West are really comfortable with "no regulations" and the "let bidness be bidness" posturing of Rick Perry.  They lived with this disaster; they don't want to live with it again.  And I can't blame them for wanting another plant nearby.  When the explosion occurred at Texas City in 1947, the port wasn't shut down and mothballed.  People gotta eat.

Still, I can't help but think there's more concern for a new plant, and for how it will be built, than there was before.  I hope there's even some concern with what the plant has stored onsite, and who else knows about it:  like governments local to federal, firefighters, "first responders," etc.  Mostly, though, my heart goes out to the silent people of West; the ones who don't want to air their opinions even anonymously to a Reuters journalist.

They are the ones who need to be heard, and who need representation by someone other than Rick Perry and the government of the state of Texas.

The Legislature is still not interested, and the fix is pretty much in:

Thomas McGarity, a University of Texas at Austin law professor and an expert on regulation, said he also doesn't expect to see more than "a modest bill that the industry can live with and that allows legislators to claim that they have addressed the problem."

"The West tragedy is already fading in the public memory, and the absence of similar tragedies in the interim has reduced the sense of urgency that is typically needed to impel regulatory legislation through the Texas Legislature," McGarity said.


Who knows, though?  Maybe something will happen.  Ask the right questions, and the Mayor of West might even give you the right answers:

Joyce Gregory, a 15-year West resident, said her daughter's family lived seven houses away from the fertilizer plant when the explosion happened. The family since has relocated for jobs, but she said the loss of lives changed her view about the need for government regulations.

"If there are rules, then the state or whomever should make sure they are following them," said Gregory, a waitress at the West Auction Barn Café. "If that means new rules, so this can't happen, then I would hope everyone wants to follow them."

Much of the furor comes from not knowing what exactly the plant was doing, West Mayor Tommy Muska said. Longtime residents, he said, remember when the plant was simply a place where bags of fertilizer were stored after arriving on rail cars.

"The bags morphed into something else," he said. "At some point, it became a blending plant and all those materials showed up."

Muska said the blast should be a wake-up call for communities like West.

"Every volunteer fire department in Texas, hell, in the country, should have learned something," he said. "Find out what is in your backyard."


Maybe a Democratic governor would even help.....
Posted by Rmj at 6:23 PM