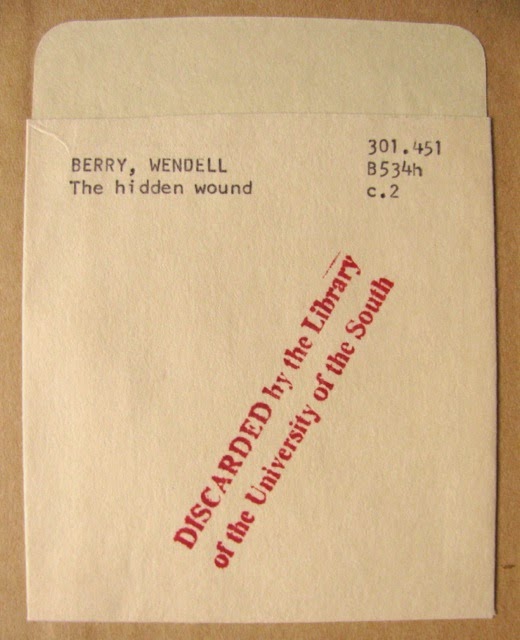 The story of that picture can be found here.

As I've said before, ideas are bulletproof; and that's the problem.  This, for example, is certainly not an idea I'd have thought was alive and well in the late 20th century, or still stirring events in the 21st century.

By the time Mack saw him speak in 1984, Skousen was a leading light of right-wing radicalism, a theocrat who believed the decline of America began with passage of the 14th Amendment and its guarantee of equality for the former slaves and others. A former Salt Lake City police chief who spent 11 years with the FBI, Skousen had toured the country in the late 1950s and into the 1960s to whip up anti-communist fervor under the banner of the John Birch Society. His best-selling book in 1958, The Naked Capitalist, warned of a cabal of global elites who were scheming to create a worldwide, collectivist government — what the JBS and Patriot groups now fear as the “New World Order.” He demonized the federal regulatory agencies and wanted to abolish civil rights laws, labor unions, the minimum wage, the income and estate taxes, the direct election of U.S. senators, the wall between church and state, and many other government programs and initiatives.


Yes, before Barack Obama or Agenda 21, it was George H. W. Bush and the "New World Order."  But before all that, it was the Civil War, and the 14th Amendment.

And you thought all the crazed and paranoid racists were in the Old South.

"Mack," there, by the way, is Richard Mack, former sheriff of Graham County, Arizona.  He is now known to us for being the founder of the Constitutional Sheriffs and Peace Officers Association.  Why do we care, you ask?  Because he's directly connected to Cliven Bundy:

It was Richard Mack, a former Arizona county sheriff and founder of the Constitutional Sheriffs, who had said Monday that the gathered self-described militia had considered using women as human shields if a gunfight with federal officials erupted. He elaborated on those comments Monday in an interview with radio host Ben Swann.

“It was a tactical plot that I was trying to get them to use,” Mack said in comments flagged by The Raw Story. “If they’re going to start killing people, I’m sorry, but to show the world how ruthless these people are, women needed to be the first ones shot.”

“Disarm the federal bureaucrats," Bundy said in an interview with Fox News's Sean Hannity. He had been asked to respond to Senate Majority Leader Harry Reid's assertion that the Bundy Ranch standoff (as it is now officially known on Wikipedia) was "not over."

Bundy had already  asked  his local sheriff to arrest the BLM officials who were rounding up his cattle, but he directed his new message to "every county sheriff in the United States."

Bundy's statement brought to the forefront a theory that some on the far right have held for decades: that local sheriffs are ordained with an immense amount of power, going beyond that of even federal authorities. In the Bundy Ranch dispute, that theory is the driving ideology of some of the groups that have rallied to the rancher's side. Those include the Constitutional Sheriffs and Peace Officers Association and the Oath Keepers, whose members are law enforcement officials and military who have pledged to defend the Constitution against government overreach.


Bundy has already said the federal court was not a court of competent jurisdiction over this dispute; he denies the legitimacy of the claims of the BLM to collect grazing fees from him.  Why?  He denies the legitimacy of the federal government.  And what does this illegitimacy trace back to?  Well, in at least one direction, to the 14th Amendment, which gave equal rights to people who don't look like Cliven Bundy or any of the 1000+ people who turned out last week to protest the actions of the BLM.

But this dispute didn't arise because Barack Obama was inaugurated into the Presidency.  There is no direct link between Bundy and Obama.  That doesn't mean Bundy's claims are not about race; but it does mean that, in America, it's never about race.

Cliven Bundy insists this dispute is about the legitimacy of governments and of law.  The driving force, however, is identity.  Cliven Bundy identifies with a handful of cranks.  I've no doubt most of the ranchers in Arizona and Utah quietly pay their grazing fees and don't lionize Bundy for getting away with not paying his.  He's an outlier, even in the West.  But the driving force here is who he identifies with, and the basis upon which he breaks with the U.S. government.  No doubt many ranchers in the area resent some federal government policy or other, or even resent how much of the West is federal, not private, land.  That's kinda like resenting the authority of your landlord, even as you want to stay on your landlord's good side.  Bundy's resentment, though, is rooted in the idea that such power must be illegitimate; and he gets support for that idea from people like "Sheriff Mack."  Who in turn got that idea from W. Cleon Skousen; who thought the 14th Amendment proved the federal government had overstepped the Constitution, by amending the Constitution.

Which returns us to the vision of the "Founding Fathers," and just how much control that "vision" should have in our public policy debates today.  Because if you adhere closely enough to what the "Founding Fathers intended," it's really not that hard to argue changes like the 14th Amendment violate the Constitution itself.  I mean, if the Founding Fathers had intended it, it would have been part of the "Bill of Rights," right?

But it's not about race; because it's never about race.  And the reason the 14th Amendment wasn't in the Constitution to begin with, was not because of race; or class; or gender; or power.

No, the Constitution was a vision about who should be in power; and who shouldn't.  And it still is.  And who shouldn't be in power are individuals who think any power that limits their power, and recognizes the legitimacy of others, is itself illegitimate.  And that's where it is about race, even though it's never about race.  There is a clear thread, if you wish to follow it, from complaints about the 14th Amendment to complaints about the legitimacy of the Affordable Care Act and the Voting Rights Act.

It is that hidden wound that keeps on bleeding.
Posted by Rmj at 9:14 AM