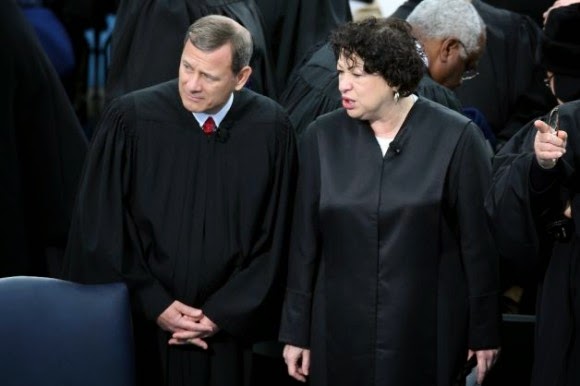 The Chief Justice of the Supreme Court, in 2007:


Especially now that the demographics are shifting in favor of non-whites.  Can't stop talking about race or discriminating on the basis of race too soon.

To be clear, I agree with Justice Sotomayor (and Justice Ginsberg, who joined in the dissent without any distinction via a separate opinion.  And, to be consistent with my argument below, I should say that taking this paragraph out of context makes it sound like the dissent is couched in the same terms as Roberts' concurrence):

In my colleagues' view, examining the racial impact of legislation only perpetuates racial discrimination. This refusal to accept the stark reality that race matters is regrettable. The way to stop discrimination on the basis of race is to speak openly and candidly on the subject of race, and to apply the Constitution with eyes open to the unfortunate effects of centuries of racial discrimination. As members of the judiciary tasked with intervening to carry out the guarantee of equal protection, we ought not sit back and wish away, rather than confront, the racial inequality that exists in our society. It is this view that works harm, by perpetuating the facile notion that what makes race matter is acknowledging the simple truth that race does matter.

But it's not about race because it's never about race; especially since "minority race" is fixing to take on a very white face.

That's the post I started to write about the recent Supreme Court decision.  Then Dahlia Lithwick pointed out that Chief Justice Roberts had written a two page concurring opinion which was nothing more than a "You can't talk to me that way!" rebuke of Justice Sotomayor's dissenting opinion.  Especially considering how much attention has been paid to the dissent in this case, the concurring opinion of the Chief Justice is remarkably free of legal content.

Granted, it is only two pages; but in the entire dissent, any kind of legal argument is relegated to a footnote at the end of the opinion.  The rest of the opinion can be summed up in two sentences:

On the dissent’s view, if the governing boards conclude that drawing racial distinctions in university admissions is undesirable or counterproductive, they are permissibly exercising their policymaking authority. But others who might reach the same conclusion are failing to take race seriously.

That's the argument: not a legal argument, or an analysis of Constitutional law or even of state's rights or the 10th Amendment; but a response that boils down to "Don't call me a racist!"

Chief Justice Roberts simply "whitesplains" to Justice Sotomayor just why race is no longer a factor in American life, because, of course, it isn't about race and it shouldn't be about race. (I will leave the demolishing of that argument to Justice Sotomayor's well-reasoned dissenting opinion.)  Oddly enough, apparently it isn't about law, either.  And he doesn't even try to tie his opinion to the majority; this "concurring opinion" lacks even the two words "I concur." It starts this way:

The dissent devotes 11 pages to expounding its own policy preferences in favor of taking race into account in college admissions, while nonetheless concluding that it “do[es] not mean to suggest that the virtues of adoptingrace-sensitive admissions policies should inform the legal question before the Court.”


and ends this way:

People can disagree in good faith on this issue, but it similarly does more harm than good to question the openness and candor of those on either side of the debate.


And in between the entire opinion is, as I said:  "Don't call me a racist!"  It's a remarkable public display of pique, and a legally worthless document that reveals a great deal more about the Chief Justice than it does about his legal reasoning.  It also reveals a great deal about the state of our national discussion of race, as we face the demographic fact that "whites" will soon be the minority of the country.

Sotomayor's opinion runs for 58 pages.  In those 58 pages she addresses the legal history of the Court's opinions on race in America, and spends several pages defending the concept of stare decisis, which she decisively shows has been all but abandoned by the plurality opinion in this case.  Even the discussion of why "race matters" (pp. 44-46 of the opinion) is couched in terms of case law and Supreme Court opinions.  Out of those 68 pages, the language Chief Justice Roberts is responding too takes up 5 paragraphs, and is couched, again, in terms of legal opinions of the court, including the once cited parenthetically from that 2007 opinion by the Chief Justice.   Significantly, she only addresses opinions signed by Justices.  She never makes any personal statement about the Justices.  Her statement that: "In my colleagues’ view, examining the racial impact oflegislation only perpetuates racial discrimination" is made in the context of citing both the plurality opinions in this case, and in the opinions cited in other cases referenced in the dissent.

Which makes the response of the Chief Justice even more bizarre.

But it's still not about race; because it's never about race.*

*I won't even touch Scalia's response to Sotomayor.  His idea of "racial entitlements" merits completely separate consideration at another time.  Frankly, I find it hard to slip a piece of paper between him and Cliven Bundy.