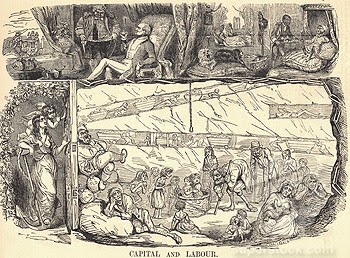 I started the day reading about how Charles Koch resents collectivists ("those who stand for government control of the means of production and how people live their lives") who resent his political spending.  Collectivists, he says,"promise heaven but produce hell." (Charlie Pierce has more extensive excerpts.)

Because how people live their lives and spend their money is entirely up to them.  It's not like the rich owe anything to the society that made them rich!  And a society without regulation of the means to production would be a paradise for all, pretty much like it is in Texas!  And then the radio served this up:

This, then, is held to be the duty of the man of Wealth: First, to set an example of modest, unostentatious living, shunning display or extravagance; [second] to provide moderately for the legitimate wants of those dependent upon him; and [finally] to consider all surplus revenues which come to him simply as trust funds, which he is called upon ... as a matter of duty to administer ... to produce the most beneficial results for the community ...

"To Carnegie, the financially successful don’t have a choice — they have a moral obligation to give back to society. It’s a refreshing perspective." Refreshing because Charles Koch speaks for most wealthy people today:  the most beneficial results to the community arise from leaving him free to spend and live just as he pleases (despite the fact the community, as Carnegie understood, makes his wealth possible).  Clearly Carnegie is a collectivist, too.

But then, apparently Lincoln was a collectivist:

It is not needed nor fitting here that a general argument should be made in favor of popular institutions; but there is one point, with its connexions, not so hackneyed as most others, to which I ask a brief attention. It is the effort to place capital on an equal footing with, if not above labor, in the structure of government. It is assumed that labor is available only in connexion with capital--that nobody labors unless somebody else, owning capital, somehow by the use of it induces him to labor...

Now, there is no such relation between capital and labor as assumed; nor is there any such thing as a free man being fixed for life in the condition of a hired laborer. Both these assumptions are false, and all inferences from them are groundless.Labor is prior to and independent of capital. Capital is only the fruit of labor, and could never have existed if labor had not first existed.

Labor is the superior of capital, and deserves much the higher consideration. Capital has its rights, which are as worthy of protection as any other rights. Nor is it denied that there is, and probably always will be, a relation between labor and capital producing mutual benefits. The error is in assuming that the whole labor of community exists within that relation.

And so was Ben Franklin:

All Property, indeed, except the Savage's temporary Cabin, his Bow, his Matchcoat, and other little Acquisitions, absolutely necessary for his Subsistence, seems to me to be the Creature of public Convention.

Hence the Public has the Right of Regulating Descents, and all other Conveyances of Property, and even of limiting the Quantity and the Uses of it. All the Property that is necessary to a Man, for the Conservation of the Individual and the Propagation of the Species, is his natural Right, which none can justly deprive him of: But all Property superfluous to such purposes is the Property of the Publick, who, by their Laws, have created it, and who may therefore by other Laws dispose of it, whenever the Welfare of the Publick shall demand such Disposition. He that does not like civil Society on these Terms, let him retire and live among Savages.

He can have no right to the benefits of Society, who will not pay his Club towards the Support of it.


Carnegie was against inherited wealth.  He wrote that a thoughtful man would as soon leave his children a curse as leave them inherited money.

The Koch Bros. inherited all their money.

And come to think of it, there is no mention of "capitalism" in the U.S. Constitution.