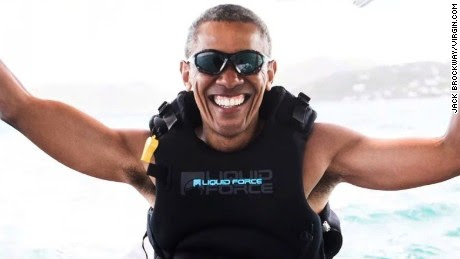 You've mistaken him for someone who cares what you think....

This is the first time, frankly, I have learned that Obama is scheduled to give the dreaded $400,000 speech in September (!  "Sufficient unto the day is the evil thereof"), and that he's addressing a health care conference sponsored by a Wall Street firm, not speaking to employees of said firm.  And it makes sense he'd be asked to speak about health care policy (I'm sure he's not speaking about the actual delivery of healthcare to individuals), and if he can get that much money for it, power to him.

Primarily what I've read about this has been that Obama is one of these three options:

Here's another perspective—a third way, if you will: Barack Obama is not selling out his ideals or taking a paycheck that's unrelated to them. He's doing this because he thinks big-money special interests have a valid place in American politics.

I doubt he'll bite the hand that will feed him $400,000.00  I'm sure he won't pull a Colbert At The White House Correspondents' Dinner.  But what will he say?

I hesitate to bring up this comparison because it always seems over the top, but the criticisms of Jesus in the gospels raises the same issue: it wasn't what he was saying or doing with the poor, beggars, prostitutes, and tax collectors.  It was that he was seen with them at all.  Of course the response of Jesus to his critics is not the response of Obama at all, except in this sense:  Jesus talks about what he is doing, and then who he is doing it with.  He turns the criticism back on his critics, relying on the Mosaic traditions of caring for the outcast, the marginalized, the metaphorical "widows and orphans" (rather than being limited literally to those groups).  In the end, he uses the criticism as an object lesson in being last of all and servant of all.

Obama, of course, is not speaking for the marginalized, the outcast, the "widows and orphans."  But in a sense, maybe he is.  The GOP wants to gut the ACA so badly it will hurt your grandchildren.  I think it's clear by now that Paul Ryan doesn't care about healthcare delivery at all, he just wants to eliminate the taxes the ACA imposed; taxes that fall mostly on the rich.  Obama is taking $400,000 from rich people to tell them why the ACA is good (I can guess that much).  What's the problem here?

It isn't the same thing as preaching the gospel, I'll admit.  But it's a far sight better a message than anything else coming out of any politicians right now, and I include Bernie Sanders in that.  Maybe the issue isn't that Obama will take the filthy lucre of the filthy rich:  it is theirs to give and his to take.  Maybe the issue is:  what will he say?  Yes, Wall Street is the enemy of "progressives;" but do you defeat your enemies by opposing them, or by treating them as not-your-enemies?  If Obama speaks up for the ACA and the very concept of healthcare for all, is that message rendered moot by his speaking fee, or who paid it?  Obviously there are forms of confrontation that are not cooperation; and Barack Obama speaking about health care to a conference sponsored by a Wall Street firm is speaking to truth to power when the power is the GOP Congress and President Donald Trump.  Obama is not likely to tell them anything close to what Jesus told the beggars and the prostitutes in his day, but he is more likely to tell a health conference that how important it is that they see themselves as servants than almost any politician (or former politician) I can name.