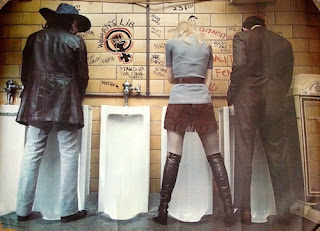 Lite Guv. Dan Patrick wanted to pass a "bathroom bill" a la North Carolina's, because of bathroom predators and bathroom privacy and reasons.

The "predators" idea is what sank the Houston Equal Rights Ordinance ("HERO"), something that gained national attention for Houston (o boy!) and which Patrick was deeply familiar with, he being from Houston and all.

Now you have to realize the Texas Constitution doesn't give power to any one person.  The Governor and the Lt. Gov. are elected separately, and while the latter presides in the Texas Senate and the former is the only person who can call special sessions and decide precisely what the special session will try to pass (and once passed, the session is over; no hanging about passing any other laws not put on the agenda by the Guv.), that's about as powerful as the offices are.  It's largely a matter of political clout as to how much you can do in either position.  Bob Bullock was a legendary Texas pol who knew where ALL the bodies were buried in Texas, and he ran the state as Lt. Guv.  He even got a Texas history museum named after him in Austin.  Former Gov. Dolph Briscoe has his name attached to a museum on UT campus in Austin, but that's because he was rich and left a lot of money for it.  Everybody still remembers the long shadow Bullock cast; Briscoe is a phantom of some very long memories (like your host's).

So Dan Patrick was determined to "North Carolina" Texas.  Except Texas business interests didn't want to see that happen, and Joe Strauss, Speaker of the Texas House, listens to the bidness men.  Patrick's bill passed the Senate, but never had a prayer in the House.

Texas has one of the shortest legislative sessions in the country:  six months every two years.  Anything outside of that is a "special session," called by the governor, limited to what the governor puts on the agenda.  The Governor is not anxious to put Patrick's "bathroom bill" on the agenda; but he's not anxious to cross the crazies Patrick and the Texas Senate represent.  Strauss doesn't care; he's not letting Texas become the next North Carolina.  Patrick decide to flex his muscles and demand that bill (and a few others) get to the House floor, or he wouldn't pass the state budget, the only law the Lege has to pass in regular session (or come back immediately in special session).

Texas legislators don't get paid well to come to Austin for six months, and they are anxious to leave when the whirlwind is over.  But the law is the law, and a budget must be passed, before the end of the month, or in the summer.

And then this morning I learn that a "compromise" has shown up in the House, an amendment to another bill, that would limit the "bathroom bill" to public and charter schools.  K-12, so as not to bother the NCAA (of course).  The original bill applied only to public buildings, so you're local restaurants public bathrooms would not have been affected.  But if Caitlyn Jenner were to visit your local Texas courthouse or city hall, she'd have been directed to the men's room; presumably.  If she was recognized (the only reason I mention her); and if there was a policeman ready and willing to do his/her duty under the law.  Fat chance, IOW.  Still, that risk could be removed if this amendment makes it to the Senate and the Senate decides half a loaf is better than a special session.

Of course, the only people even Patrick's original bill would apply to was students in public schools.  There was a question of whether publicly owned football stadiums would be covered, and I never envisioned police standing before the bathrooms checking birth certificates and...well, what?  The premise of the bill was to enforce privacy, right?  So in the name of privacy we make you drop drawers and show a piece of paper besides?  Yeah, right.

The first excuse was predators:  men in women's clothes looking to rape our innocent white young girls.  That worked in Houston, but it won't work again, and it's pretty much gone as an argument.  Privacy was next, but bathrooms are supposed to be private, and unless transgendered women are gonna belly up to the urinal, whose to know, unless we remove the doors on stalls in the name of privacy?  So we're down to the point of this bill all along, and the only population it could ever apply to:  public school students.

The schools know who you are, and what it says on your birth certificate, and the schools alone can police their bathrooms in the ways no other institution can.  Even the broadest reach of Patrick's fevered dreams was only ever going to come down to public school students.  Apparently public school isn't hard enough, we have to make it tougher.

Then again, this may not pass muster in the Senate, because it allows an out:

The last-minute vote amended a Senate bill focusing on school districts' emergency plans and added language requiring K-12 schools provide single-stall restrooms and other public areas to a student "who does not wish" to use facilities designated by "biological sex."

The result is the same:  Dammit, we gotta discriminate against SOMEBODY!  What's the point of having a legislative session in Donald Trump's first term if we don't do that!

And while we're talking about schools, Patrick still insists on a sop to hard-working rich people:

HB 21 now includes a provision the House hates and Patrick wants: state subsidies for parents who want to send their children with disabilities to private schools or need money for services to educate them at home.

The amount involved is about $8000.  That won't pay tuition at many private schools, if you can get in (most around here have waiting lists.  Well, the better ones.).  And those aren't even the schools targeted.  Fewer and more expensive and more exclusive are the private schools that take children with disabilities.  Such schools limit enrollment, as all private schools do.  So if you think you can take that voucher and put your kid in a private school that will deal better with her needs, I'm afraid that won't happen.  But if you have the money for that school, $8000 is nice refund on the costs you're paying.  As I say, this won't help people who can't afford those schools; it will only help the people who can.

The flip side of this is that Texas tried something like this years ago, allowing people to take the money and spend it on private schooling of almost any description.  A huge number of fly-by-night schools opened, took the money, and ran.  Imagine how much worse that would be for poor parents with children who need help and get the minimum Texas will pay for and the federal government will  provide; and then they go to a private school that has no interest beyond getting that voucher coupon cashed.  We've seen this movie, we know how it turns out; and now we're gonna sit through it again.

And for those kids who can't escape the public schools, we'll make sure to shame them as much as possible about where they go to relieve themselves.  Why should life be easy for kids whose parents aren't rich, right?