They certainly are this clumsy

I think the bigger point on that is, “My gosh, Tucker, when are they gonna let that go?” It’s been going on for nearly a year. Frankly, it’s kinda getting absurd. There’s nothing there. We’ve heard that time and time again. We’ve heard it in the testimonies earlier this week. We’ve heard it for the last 11 months. There is no there there. It’s time to move on.

Comey's gone, nothin' to see here, why are we still talking about this?!  Is there a connection between Comey's firing and this desire to move on?   How could there be?

“Were these investigations getting too close to home for the president?” Schumer asked, at a last minute press conference organized Tuesday evening.

“In fact, the President makes very clear in his letter the fact that Mr. Comey on at least three occasions assured the President that he is not under investigation,” [Kellyanne Conway] said in an interview with CNN’s Anderson Cooper.


And you know that's true because Trump said so, in his letter!  Did that actually for-realsies happen?

“That’s between the President of the United States and Director Comey,” Conway responded.


But who cares?  This is so last year!

“I think you’re looking at the wrong set of facts here,” she responded. “In other words you’re going back to the campaign. This man is the President of the United States. He acted decisively today.”


Unlike the set of facts that Trump relied on, events that occurred before the election.  That's the right set of facts for him, but the wrong set of facts to question his action.  See?  Besides, it's all Chuck Schumer's fault!


Cryin' Chuck Schumer stated recently, "I do not have confidence in him (James Comey) any longer." Then acts so indignant. #draintheswamp
— Donald J. Trump (@realDonaldTrump) May 10, 2017

(Yes, they're really gonna go there.  What choice do they have?)  So why's Schumer whining now?  Truthiness will win out!  Because I bet you didn't know this! 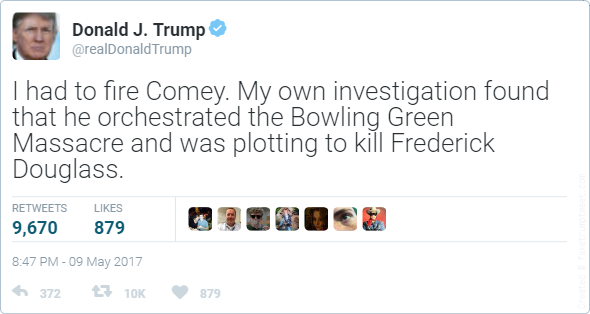 If I didn't know it was fake, I'd believe it was real.