Anachronism: it's not just for breakfast anymore 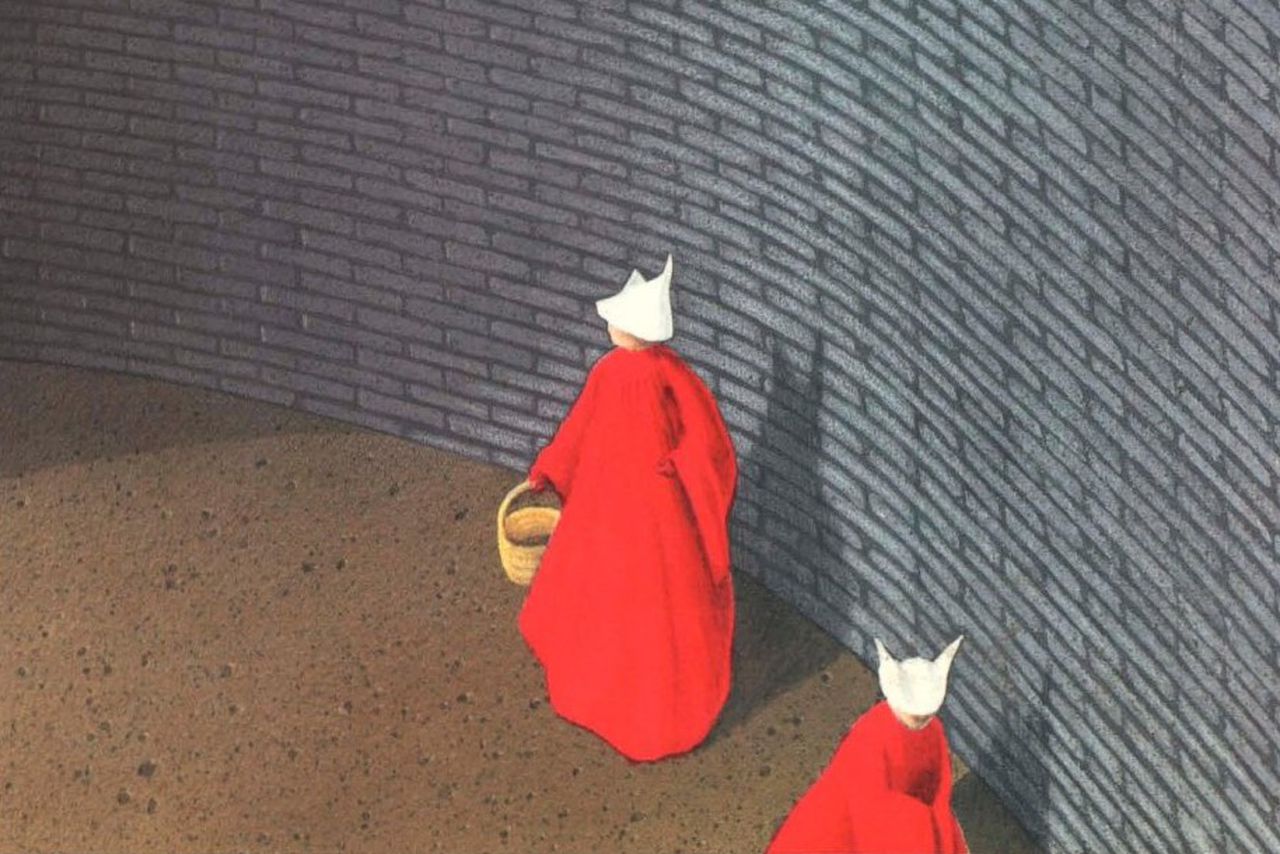 This is another reason I've never been that excited about The Handmaid's Tale.  No, it's not because I'm mad for patriarchy.  I'm actually passionate about the basilea tou theou, where the first of all is last and servant of all (something I don't think the author of the article that inspired this post would be too keen about). It's rather because the story gives rise to so much, well:  stupidity.

If The Handmaid’s Tale offers any sign, Margaret Atwood has read more of her Bible than many Christians. Superficially, Atwood’s dystopian novel is littered with biblical names and phrases: Gilead, Mary and Martha, Jezebel, Milk and Honey, All Flesh, Loaves and Fishes, Lilies of the Field, the Eye of the Lord, Behemoth, and many more.


I do recognize all those references (and can give you the Biblical references if we had the time, some faster than others), and it's not because I went to seminary.  Biblical literacy used to be something of a given among Christians.  My wife knew the scriptures better than I did before seminary, because she attended a different church as a child than I did.  Biblical literacy was taught, and then it wasn't.  So I guess now many Christians, especially the ones attending mega-churches where the Bible seems to be an afterthought (did I mention my worship service always included four scripture readings?  The Hebrew Scriptures (a/k/a the "Old Testament"), a Psalm, an epistle reading, and the gospel reading.  Small wonder a member of my first church complained that I talked too much about the Bible.), are as oblivious to those references as Ms. Taricot assumes we all are.  Margaret Atwood's knowledge of the Bible is frankly no better than mine even before I took courses in Biblical scholarship and exegesis.

And then what is done with this "nollij"?  Well, let me give you the topic sentences:

1. Men properly hold the highest positions of authority in society and the family.

That's why they call it a "patriarchy."  There are a number of Biblical scholars who offer readings of the Scriptures that show a counter-patriarchal narrative, from Genesis to Revelation.

2. Women are assets that belong to men.

A not uncommon notion in Western culture until about 100 years ago.  It's within my lifetime that divorce became an easier matter, in part because it represented the "property" asserting its personhood, and that wasn't allowed lightly.  Should have been, but it wasn't.

A common argument for the slave trade in the U.S., until the issue was finally settled by the 13th Amendment.

4. The primary identity and value of women lies in their reproductive capacity.

Still sadly true, but mostly because only one sex can bear children.  Again, not a good argument, but if you want children at all, it's up to women to get pregnant.  So I'm not sure it's a "Biblical" issue, so much as a human one.

5. Sons are more valuable than daughters.

Still not an uncommon attitude, and one expressed by atheists like Richard Dawkins.

6. When it comes to breeding, paternity is what matters.

Interestingly, I understand being a Jew by birth depends upon one's mother, not the father.  That changed for the children of Abraham millennia ago.

7. Infertility is a female issue.

Until modern medicine and anatomy fully understood how the human reproductive system worked, this seemed a given.  The analogy from observation was the man planted "seed" (still a euphemism for semen) in the woman's "ground" (womb).  The female reproductive system is complex and brief (men are fertile far longer, on average), and hidden.

8. Female consent is not a thing.

It wasn't that long ago a man could not rape his wife.  "Consent" in the sense meant here is a fairly new concept, which is not to say I have anything against it.  But it's anachronistic to think it applies backward from now to the earliest human societies.  Which is not stay all sex was rape, either.  Chaucer's "Miller's Tale" delightfully puts the lie to that notion.

I know the intent here is to identify the roots of these ideas in the Bible, and so condemn the Bible for bad ideas today; but that is, as Charlie Pierce would say, all my balls.  Most of these notions are considered archaic; some are actually outlawed.  Much of what is identified here is peculiar to Western culture, not to Judaism (the article carefully identifies all these ideas, which are linked to references in the Hebrew Scriptures, to the "Christian bible."  We dare not say it is Jewish, too, lest we be labeled anti-semites.  That is the true ignorance, however:  to not recognize how much these ideas are allowed to change over time.  Yes, there are minorities (numerically) who probably cling to many of these ideas as "ordained by God."  But most people don't, and even fewer of them think they are inviolable and must be rigidly enforced (as I say, much has changed in the last 50+ years, but no credit for that, eh?  Always look on the dark side of life, amirite?).

Besides, the premise of Atwood's story is that a catastrophe strikes that radically shrinks the population of the planet, creates an infertility crisis (hence the need for "handmaids") and presumes a society would arise based on a bizarre theocracy the likes of which the world has never known and would hold sway over the remaining population of the United States.  I mean, I suppose it's meant to be some kind of mirror held up to modern society but, frankly, it's a badly cracked mirror that offers more distortion than it does reflection.  Taricot's argument is that, if you pile all these examples up, complete with scriptural references, you get the society Atwood describes in her story.  However, no such society has ever existed, nor has any church or sect of Christianity or Judaism ever espoused a society even remotely resembling Atwood's dystopia.  Atwood, like Taricot, carefully bends her nightmare away from anything to do with Judaism (despite the foundation in their scriptures) and weaves it together from extensions of more severe visions of Protestantism than any Protestant leader has ever proposed (even Westboro Baptist Church is not this bad; even the Shakers, who tried as hard as they could to suppress their sexuality, were not this bad).  And why invent a fictional dystopia that we can then use to bash a straw man, when "maps can't point to places where life is evil now".  Like the state government of New Hampshire, and the internet:

After a recent Daily Beast investigation unmasked New Hampshire State Representative Robert Fisher as the secret creator of the Reddit community known as The Red Pill—one of the internet’s most misogynistic spaces—the two-term Republican resisted calls for his resignation.

As previously reported, throughout 2012, in comments left primarily under the username Pk_atheist in the Red Pill forum he created, Fisher, now 31, described women as having “sub-par intelligence,” suggested that women’s bodies are the only thing that makes their “lackluster” personalities “worth it,” and commonly expressed paranoia about what he perceived as a growing plague of “false rape accusations” supposedly used as a weapon by feminists.

While Fisher did not deny having created The Red Pill, he called his past comments “injudicious,” and suggested he no longer holds the views he once espoused online. Fisher told a local media outlet that he is not currently the moderator of any Reddit forums.

Yet further investigation by The Daily Beast suggests that Fisher may still be very much be an active contributor and chief moderator of The Red Pill, where an alias that appears to belong to him—under the username redpillschool—regularly champions misogynistic views. Fisher’s apparent link to redpillschool has not been previously reported.


Not an imagined dystopia but here and now and making avid use of social media. Admittedly all I know about "Red Pill" I've read at The Daily Beast, but aside from Fisher being described as "the homegrown son of a preacher," I can't find any explicit or implicit connection to the Hebrew Scriptures (excuse me, the "Christian Bible") in support of the blatant misogyny of the site.  And yet "Red Pill's" vision of society makes The Handmaid's Tale look like a children's story.  It is also more likely to be influential than any distorted reading of the Scriptures.

There is a long line of utopian and dystopian futures and places, and it's worth remembering the word "utopia" derives from the Latin for "nowhere."  There is enough evil in the world without inviting more of it to be seen in the world we live in, especially when the vision is so narrow and poorly realized (I mean now the versions of America which Atwood's story supposedly mirrors, but really doesn't).  Indeed, the world of The Handmaid's Tale strikes me as just as likely a vision of a future human society as the radical atheists all fighting each other to assert the purity of their atheism on "South Park."  Strike that; the "South Park" version seems more probable, now that I think of it.