The Horror of Giving Horror a Backstory 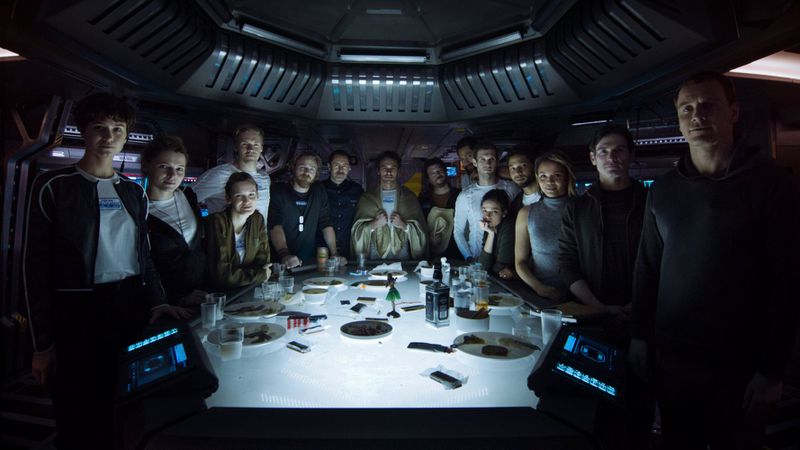 The problem I continue to have with Ridley Scott's continuation of his "Alien" series is that he wants to introduce theology into it; or at least some philosophy of religions questions like the nature of evil. And the problem is he is so bad at it.

The closest I will come to seeing "Alien:  Covenant" is reading reviews like this one.   And while this review notes a vague connection to Egypt (through Shelley's "Ozymandias," not a connection to Egypt I would press down on too vigorously) and Norse legend through Wagner (the Ride of the Valkyrie), it doesn't note the connection to Greek mythology (and angering the gods) in "Prometheus."  The anger of the gods, according to that legend, was provoked by letting humans have fire.  But Prometheus, the Titan, was punished for that crime ("sin" is a Judeo-Christian concept; let's keep our lines clean here).  "Covenant," as the reviewer at Vox notes, is an Hebraic concept, so here we are more explicitly trading on theological (i.e., Christian) ground.

But the first problem is:  "Covenant" has precious little to do with Noah's ark (despite the 2000 souls aboard the ship looking to colonize somewhere not earth; a religious concept only if you think Stephen Hawking, who keeps saying we need to do just that, is a religious thinker), and even less to do with Milton's Satan.  David the Android (will no one comment on the most famous king of Israel, who was devoted to God but also all too human?  But David the android has nothing to do with the Biblical figure; he takes his name from the Michelangelo statue, a work of art reifying the Renaissance ideal of human perfection in form, not the deeds of the king of ancient Israel) is not a figure cast out of heaven; he is a figure as alien as the humanoid creature that terrorized (will terrorize, I suppose) the Nostromo.  He's really no more sympathetic to humans than Ian Holm's character.  It will take "Aliens" to redeem the artificial persons, and "Alien: Resurrection" to allow them to find faith.

The construct here seems, to me, to be fairly straightforward, and it has nothing to do with Satan being cast out of paradise.  If you go back to "Prometheus," it opened with a tall albino figure dissolving himself into a stream, presumably creating life on earth.  Whether this was approved by his shipmates is open to interpretation, since the "Engineers" (as they come to be called) seem to be perpetually angry.  Or maybe that's just something to do with culture.  Anyway, it seems clear in that film that a)  the Engineers are all dead, at least on the base where Prometheus' crew finds them and b) they were very frightened of something before they died.  IIRC, there is some discussion of the base being a weapons laboratory, and it is this that seems to pique David's interest.  He is, after all the reason Noomi Rapace's character has to have a C-section by robot to get the alien out of her that her lover has inadvertently planted.

At any rate some of the tension of the film rests on the dreadful things they might find if they stay around so, of course, they stay around.  David finally manages to resurrect a dead Engineer and even talk to it; in return, the Engineer rips David's head off and tries to fly the alien ship away to parts unknown (it is presumed by the characters to fly the deadly payload to Earth).  From the trailers I've seen for "Covenant" David is repaired by Rapace's character, and seems to learn from her some idea of compassion.  Or not, as another scene shows him raining down some kind of black terror on a planet full of Engineers.  Satan creating Pandemonium (his "House of All Demons" cum palace in Hell)?  I'm guessing not, but you don't need Satan when you have a creation myth gone bad.

Rapace's character at the end of "Prometheus" has her faith shattered because she finds out human life originated with the Engineers, not with God's word.  A curiously literalist reading of Genesis, but let it go.  Scott seems to think he's recapitulating the discoveries of the 19th century centuries hence, and I'm not sure what that means except Scott isn't thinking about this any too hard (besides, all religious thinking is rooted in the 19th century, right?). But there's also speculation in that film that whatever weapon the Engineers were creating, it was meant to go back to Earth and destroy all life there.

So maybe that's why David turns it on them when he gets the chance.  Or maybe not, because it seems that David is responsible for the xenomorph that eventually becomes the iconic Alien.  Why is still shrouded in mystery and spoilers I haven't read about yet, but really:  who cares?  The theme here is pretty clear:  the creation of human life led to a less than perfect outcome (the whole "problem of evil" in philosophy of religion circles).  So, suitably, the creation of artificial life in our image (as we are made in the Creator's image; and is it an accident that the Engineers are chalk white humanoids?  Just asking....) is less than, well, human.  The redeeming factor of humanity, the counterpoint to evil, is compassion, concern, even love.  David lacks these traits entirely (Winona Ryder's artificial person even prays to the God of Abraham, by contrast).  David is merely experimenting when he afflicts Noomi Rapace's character on"Prometheus."  He apparently is behind the creation of the xenomorph, so his effort at creation is even more flawed than God's (or, in this case, the Engineers).

Or maybe he's just mad that that Engineer he just raised from the dead and wanted to talk to, instead ripped his head off.   And like any ungrateful creature, he turns his anger on both the Engineers and humanity.  Or maybe that Engineer just wanted to exterminate humanity as a bad concept (seems to be the point of the opening scenes in "Prometheus").  Or maybe that Engineer was doing the rest of the crew a favor, and once again foolish humans create their own worst enemy by being....human, and compassionate.  I dunno, but it seems to have something to do with Christmas, since both movies include Christmas trees on their ships (really?  After all that time?).

No, I don't know what any of this has to do with Christmas.  That's a rabbit trail too far, for me.

And the sin?  Creating something in the image of God, of course.  Really bad consequences flow from that decision.  The Greeks might even call it an act of hubris.

I dunno; does that theme play in a horror movie?

N.B.  I stepped away from "Star Wars" after the third movie (even my daughter, then the target age, gave up after "Phantom Menace."  That one bored her to tears, not just me), so I've not kept up with the plethora of films.  But now I find out (yes, the last person the planet to know) that "Rogue One" exists largely to explain why the Death Star was built with such an exploitable weakness that would destroy it at one blow.   Seems a ship designer sympathetic to the Rebels threw that in.  And how did this escape the notice of all the other designers?  And how did it cost lives to get that info?  Well, I guess that's the movie, isn't it?  But honestly, trying to turn a good one-off into a narrative empire, just doesn't work.  Ask Frank Herbert, who really should have quit with Dune.