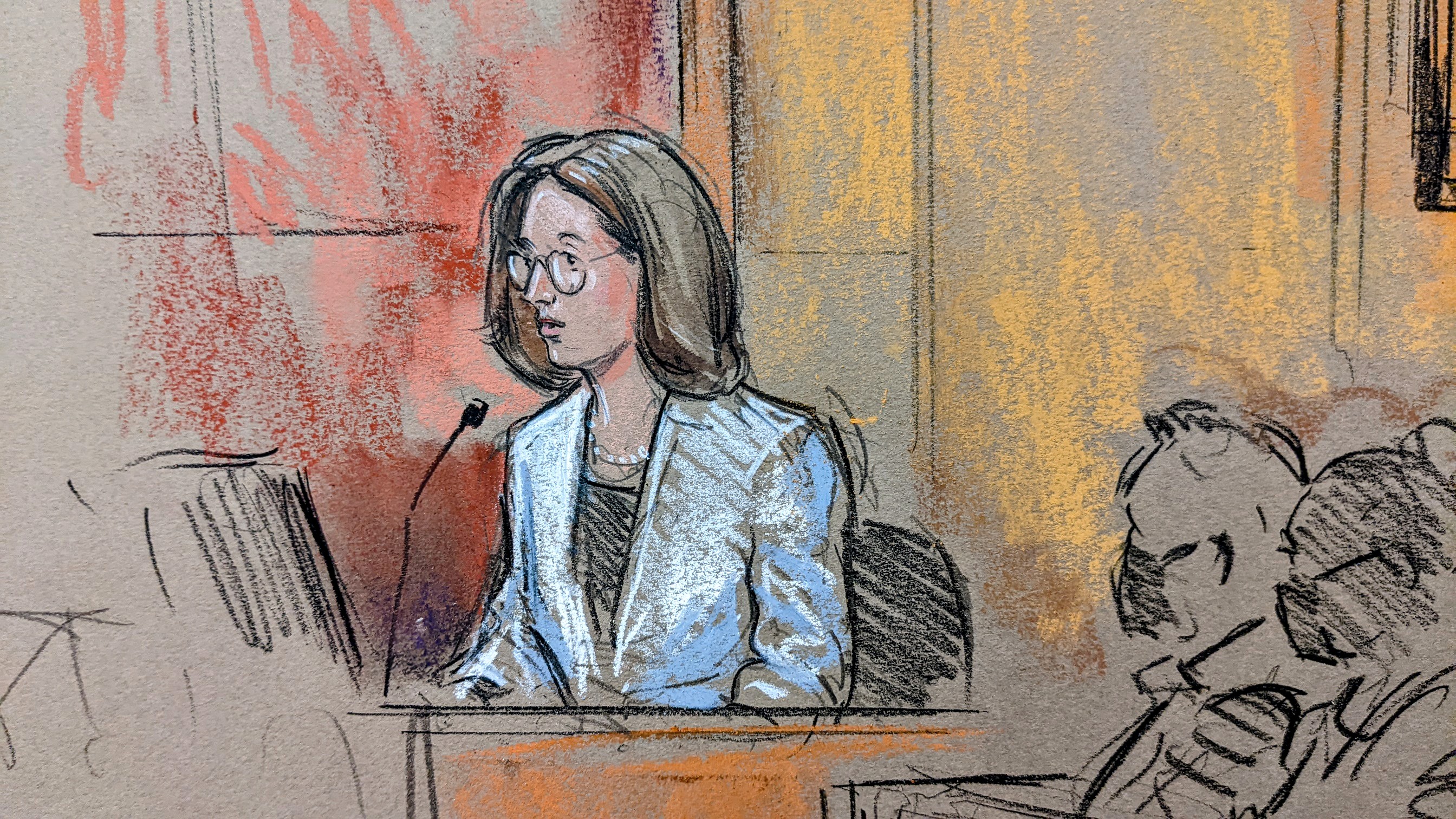 I got this from CNN, who maybe didn't air anything, because...boring?  I couldn't find a tweet. This picture is an artists rendering of Kristin Amerling, the first witness. It’ll have to do. What follows is Bannon's counsel speaking to the jury.  Small children might want to leave the room.  This is pretty medieval stuff.

Bannon’s lawyer tells jury "he's innocent of these charges": Evan Corcoran, Bannon's lawyer, began the defense’s opening statement by telling the jury that Bannon is “innocent of these charges." He briefly outlined Bannon’s biography, including his time in the Navy and the career he’s had in media. "He was a political thinker and a political strategist, and he helped a candidate run for the presidency,” Corcoran said, while touting Bannon as a top adviser to former President Trump. Corcoran noted the success of Bannon’s podcast (a term Corcoran defined for the jury as when “the word iPod and broadcast are put together") and said that the day before the attack on Capitol, most shows were reporting that there might be violence at the Capitol the next day. Corcoran then turned to the subpoena, which he noted was issued eight months later.

Defense: Evidence will show that there "was no ignoring the subpoena": As he continued his opening statement, Corcoran previewed a defense that would claim that there “was no ignoring the subpoena.” Corcoran went through the timeline around the subpoena, but not without a brief detour into a discussion of the role politics was playing. "Politics is the lifeblood of the US House of Representatives," he said, while asserting that politics also affect staff members in Congress. Turning back to the subpoena, Corcoran noted the communications between the select committee's chief counsel, Kristin Amerling, and Bannon's lawyer Robert Costello. “The evidence is going to show there is direct engagement” between the committee staff member and Bannon’s attorney, Corcoran said. "There was no ignoring the subpoena. There will be no evidence showing that."

To be fair, Ms. Amerling was the only witness called today, and I assume she didn't finish her direct. Cross-examination will be tomorrow, when the thumbscrews and the iron maiden and the hot pincers will come out.  I guess.

I'd call that opening argument a pretty strong defense, if I didn't know the DOJ will answer that before the defense gets a chance to put on a witness to it.  I think the best the defense has now is to try to create a "he said/they said" defense, maybe even put Bannon on the stand (that would be a mistake.  Not because Bannon will be filleted by the DOJ lawyers, but because Bannon will be so repellent.  I'm serious.).  It's actually a pretty lame defense anyway:  "Well, I thought I had more time!"  It doesn't explain why he never showed up at all, nor gave them a single scrap of paper (there are two counts here; one for appearance, one for document production).  I mean, completely failing to even attempt to comply and then saying "I thought we were still talking!" is not the berserker assault with a battle axe and a spiked ball on a chain Bannon has been promising.

It's not even throwing an angry cat at them and hoping it gives you time to run.

And really, if he didn't "ignore" the subpoena, he certainly didn't make the least attempt to comply with it. Maybe that's not "ignoring," in lawyer weaselspeak.  But if my wife tells me something while I'm not paying attention and then I try to plead that I wasn't ignoring her, I just wasn't listening, well....it's not gonna end the argument, is it?