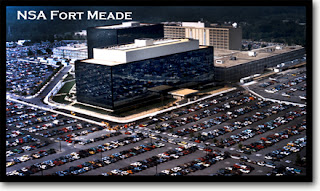 You don't see that building.  It isn't officially there.  You are getting sleepy....

Given how much information NSA collects, or tries to, the fact that the NSA screws up on occasion (2776 of them, to be exact; and each of those, as Charlie Pierce notes, could be occasions within occasions) doesn't surprise me.  Anybody in the least familiar with the functions (and more like, dysfunctions) of any bureaucracy, from private to public,  has to have wondered at least once how anything gets done; or why tall trees ain't layin' down.

My question is what it has always been, ever since Edward Snowden got Glenn Greenwald to publish his story:  why are we doing this?

The excuses that NSA was preventing all manner of terrorist threats that we'd never hear about but trust us, we're from the government, and the check is in the mail, never rang true for me.  The Boston bombing suspects went completely under whatever radar NSA thought it was using; the recent scare that shut down US embassies across the Middle East looks more and more like Al Qaeda pranking the US than Al Qaeda forgetting its protocols and suddenly and stupidly communicating by e-mail.  I really think Al Qaeda got two things out of that:  a good horselaugh, and confirmation that if they want to mislead the US, do it by e-mail.

And frankly, hoovering up every electronic communication on the planet, even if it is American or non-American, is simply piling up huge haystacks in which you hope there will be needles that you will someday find.  But given the amount of data in the electronic world, and the ever shifting ways to discuss plans to commit terrorist acts, and the fact that so many of the known recent attempted terrorist acts were thwarted by human intelligence, not electronically snooped intelligence, the very concept of "data mining" is ridiculous.

Unless you widen the scope of terms and phrases looked for to include almost any possible combination of words in all the world's languages that get used on the internets.

Seems to me we might as well go down to the beach and start counting grains of sand.  And while I should be outraged that the government is violating my privacy by looking at e-mails almost anybody can read if someone on the other end decides to start posting them to the web, or forwarding them around the world, I'm more concerned with why the government is doing this in the first place, and what possible security they think they are providing by it.

Because false security is no security at all.

Adding:  Because apparently labels carry some kind of imprimatur or are a "Get out of Jail Free" card, Charlie Pierce argues this story proves Snowden is not a "spy" but a "whistleblower."

Personally I don't care if you call him a Hero of the People and a Jack of all Trades; he needs to come back to America and face whatever prosecution awaits him.  Being a "whistleblower" may be enough to convince a jury of his peers that he's not guilty; but calling him a "whistleblower" doesn't negate the fact he violated several U.S. laws in his little escapade, and he's still entrusting his four computers and his stolen information to the tender mercies of the Russian government, who grant his asylum at their sufferance.