Mostly because I watched "Silk" tonight.... 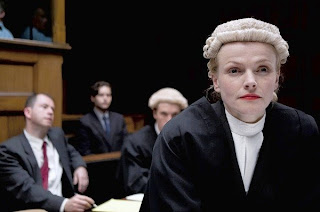 Do you want to reconsider your answer, Mr. Rumpole?


And "Silk" is so good it almost made me forget how much I loved "Rumpole" (who got a mention in the story, which is even better!), but now I have this urge to go off into matters legalistic.  And so this quote from comments below:

I don't know that we can dismiss the issue of the legality of the NSA's actions so readily. The constitution is the ultimate law of our land, and at some point we need to ask ourselves: are these searches "reasonable" and are the warrants from FISC "particular"? If not, then the NSA's actions are illegal. Of course, part of the reason why the law is an ass is because lawyers give words like "reasonable" and "particular" assinine definitions (points out someone married to a lawyer). Of course, who's to say any non-lawyer's definitions are any less assinine?

However, what worries me more about all these secret databases, no fly lists and other similar parts of our security state is that databases always have mistakes. And it's bad enough to try and fix a mistake on your credit report. How do you fix incorrect information in a massive TOP SECRET database when you don't know which database has what data on you?*

Also, does collecting all this data actually keep us safe or just help spies out? I.e. what would have happened if Snowden, rather than being a glibertarian, were a corporate spy or foreign agent?

Most of us reading this are probably old enough to remember phone booths.  Maybe you even remember the old ones, like in movies from the '40's:  you entered, closed the door, and made your phone call.  There was a serious expectation of privacy there:  you didn't expect anyone to hear even your half of the conversation.

Leave the booth, return to the public place (let's say a restaurant) and engage a conversation with your friends at the table.  If you are overheard, do you still expect your conversation to be private?  It may be rude to listen, but does it violate the 4th amendment if the person listening is a government agent?

Now replace the phone in the booth with a cell-phone.  One of my mail carriers seems to always be on her cell-phone.  She uses a Bluetooth headset so she can talk and walk and deliver mail.  I usually hear her coming from a house away.  Is she expecting privacy in a conversation she's broadcasting at least one-half of to the entire neighborhood?  And don't most of us hear one side of the conversation of anyone in a restaurant, a store, a movie theater, who is on their cell phone?  Does that person legitimately expect that no one is listening to what is being said?  Is a cell phone in public as private as a public phone booth? (Sorta like this.)

What about e-mail?  If I send you a letter, I expect you to keep it private, or at least not send it on to ten or twenty or 100 of your friends.  But if you put anything in an e-mail you want only one person to see, you're a damned fool.  It's easier to forward an e-mail than it is to forward a phone call.  How many of us have received replies to e-mails where the sender hit "Reply All" instead of just "Reply"?  Do they have a reasonable expectation of privacy if they are so clumsy in their use of the technology?

I ask because what is "Constitutional" is a lot like Howland Owl's description of nuclear physics:  "It ain't so new, and it ain't so clear."  And ultimately, we must have legitimate boundaries to the conversation.  So if something is "legal," that means it conforms to the law as interpreted by the courts.  I don't, for example, think Section 4 of the Voting Rights Act is illegal; but the current Supreme Court says it is.  I think they are wrong, but that doesn't mean I get to enforce my own interpretation of the VRA.  And the VRA is enabling legislation for the 15th Amendment, so that makes it a Constitutional issue.

But I lose that one, whether I like it or not.

Let me put this in a slightly different way, in honor of tonight's episode of "Silk"?  When is consent given?  And how must it be communicated?

I mean "consent" in the context of  rape, which is non-consensual penetration (Did Bill rape Monica with that cigar?  You see why I am purposely clinical about definitions).  First, when must consent be given?  Before?  After?  During?  These are important questions (they didn't come up in "Silk," and likely wouldn't in a trial, but still....).  How must it be conveyed?  If you thought you had consent, and she says you didn't, who should win that fight?  Why?  What if consent is withdrawn after the fact, like the next morning?

This actually happened in a case I read about.  Two friends, male and female, get drunk at college, sleep together, wake up the next morning realizing that wasn't so smart.  She decides later she doesn't want to consent to the drunken sex, so she calls her one-night lover a rapist.  No criminal charges, of course, because legally it's too late (damned legalisms!).  But the male part of this "couple" is decried, formally and publicly, all over campus, as a rapist.

Is the NSA behaving legally?  Unless that term means "within the law as interpreted by the courts, " the question really has no meaning.  Or rather, its meaning is subject to a great deal of unfortunate confusion.  How should these things be decided?  "Is the law correct?" is a separate question.  "Is the law in conformity with the Constitution?" is yet another question.  I may not think it is; but until the Supreme Court agrees with me, my opinion is meaningless.

So I shouldn't have an opinion?  No, I don't mean that, either.  Perhaps the solution here is political.  But then you have to consider how much of the NSA we can do away with (more than we think, IMHO).  That discussion, however, needs to be conducted on the basis of facts, not diatribes, and at least some understanding that the law is a complex web because it has to be.  You may have a reasonable expectation of privacy in your landline phone calls, which require a great deal of specific effort to listen in on; but you clearly don't have any expectation of privacy in a public place.  So how private is a personal cell-phone call in a public place where you are apt to speak abnormally loudly?

Or is that the question of a ass?

*the eternal problem of the FBI file, eh?