"If they think they're better than him, they're wrong...." 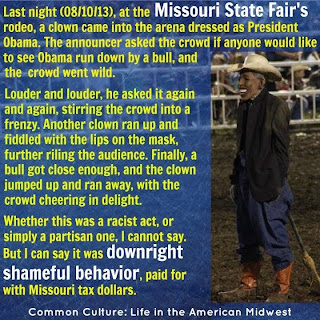 Somebody else who just doesn't get it.


Having come across this here, and here, I have to say:  this is the most blatant example of racism I've seen in awhile:

Let me suggest a classy Obama move that might go over well. From his Vineyard vacation spot he should have the press office issue a release saying his reaction to finding out a rodeo clown was rudely spoofing him, was, "So what?" Say he loves free speech, including inevitably derision directed at him, and he does not wish for the Missouri state fair to fire the guy, and hopes those politicians (unctuously, excessively, embarrassingly) damning the clown and the crowd would pipe down and relax. This would be graceful and nice, wouldn't it? He would never do it. He gives every sign of being a person who really believes he shouldn't be made fun of, and if he is it's probably racially toned, because why else would you make fun of him?

A white president does not bear the burden of whites in black-face having reduced his ancestors and him to the status of an animal to be ridden at the rodeo or raised lovingly for slaughter.


But also racist because Noonan's argument is that this whole kerfluffle is Obama's fault.  It's his fault people pay attention to his skin color and make him look like a witch doctor and call him a Kenyan who shouldn't be in the White House, and it's Obama's fault because every white President who's ever been mocked in public like that, has invited the mocker over to the White House for a beer, or told tout le monde that whole thing is funny because "free speech" and Orson Welles and what have you.

But Obama can't do that because, well, you know:  he's black, and being a black man, he's too uppity to get down with this fine country humor.  Surely even St. Ronnie of Reagan would have thought mocking a black man in America was finally worth a chuckle, now that we're a post-racist society 'n' all.

The rodeo announcer claims the clown took to the PA system his own self, stuck a broom up his backside, made all the jokes about Obama getting run over by a bull, and let another clown come out and play with his lips because, you know, white people are always playing with their "big lips" so that's not a sign of racism at all.  Certainly no racism in calling Obama a clown, either.  And somebody who was there said it felt like a KKK rally, but really is that any reason to tell a clown he can't work the Missouri State Fair anymore ever?  Even if the clown's employer apologized for the incident?  Is this the post-racial America I woke up in this morning?

I mean, have we really reached the point where we can't make fun of black people in public the way we used to do?  Because that would be a real cultural loss, donchathink?

And also too as well you know, it'd be mighty white of him if Obama would acknowledge this tempest in a teapot (it's August, after all) and be magnanimous and put some pressure on the state of Missouri to give the guy his job back, because, I mean, he can pretend to play golf, can't he?  So why can't he do this?

Because he's NOK, that's why.  Which is a much nicer way of saying "Uppity," which we should be able to say, too.  I mean, since Obama's been elected twice, it should prove we're past all that "racial" stuff.  So why can't we put it behind us and go back to doing things the way we did in the '50's?

And the President really should spend more time acknowledging jokes and jibes made at his expense, and pardoning the people who do so.  I mean, that Joker thing was funny!  Obama really should have acknowledged that.  And it's not like he's got anything more important to do.