Were you born in a barn? 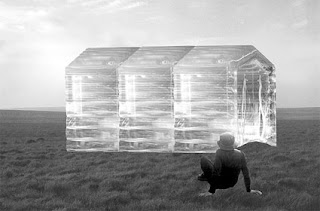 Out with the bad air, in with the good air!

Not my area of expertise at all, but I gotta wonder:

Why are we so afraid of the outdoors?

The basic concept of passive house is to lower energy consumption by being super-insulated and practically airtight. Empowerhouse has 12-inch thick walls and triple-glazed windows and, as a result, uses up to 90 percent less energy for heating and cooling than an ordinary house. Such low energy consumption enabled Empowerhouse to have one of the smallest solar panel arrays in the competition, which helps keep construction and maintenance costs down.
...
In order to become certified as a passive house, the building has to be tested for leaks and cracks that would make it less efficient. Orlando Velez, Manager of Housing Services for Habitat for Humanity of Washington D.C. explained that the test is serious business.

“They take a huge blower fan and put it in one of the doors and then close everything else up,” said Velez. “The fan sucks all the air out until the house is pressurized at fifty pascals, then they watch to see how much air is leaking [into] the house. We rush around the outside of the house with a smoker test and try to find every place we’re leaking.”


We call this an improvement.  My grandparents would have called it "stuffy."

I still remember their house, and I don't remember that it had air conditioning.  It certainly didn't have "central air" (the term we used to use in the dark ages, to distinguish the compressor/duct work system from window units or no A/C at all), and I don't remember any window units.  I also don't remember any severe discomfort whenever we visited there.  But then, I spent my childhood outdoors, even in August in Texas.  The central air in our house came later.  On summer nights we'd open the windows and turn on the attic fan (a whole-house fan so big it's still there; it was too big to remove when the central air was put in).  On really, really hot nights, we ran the two window units.

People, in other words, used to live outdoors, even when they were indoors.  We had screen doors, and screens over the windows.  Mind, I live in Houston now, and I keep the windows closed because A) it's hot and humid, and mostly it ain't the heat, it's the humidity, and B) in a city dominated by cars, dust and dirt are everywhere.  It's bad enough with the windows closed; I can't imagine what it would be like with the windows open.

And I don't think I'd want to sleep with my windows open in D.C., either; or here in Houston, for that matter.

Still, we seem to hate the outdoors, and want to hermetically seal ourselves off from it.  I was charmed by a version of "Pride and Prejudice" that showed the English country home open at all points to the air and even the livestock.  I remember houses that were open all day to catch a breeze, or closed against the winter chill, but never so closed we didn't long for hot chocolate or even a blanket.  There's a lot to be said for reducing energy costs and consumption, but there is no free lunch, either.  Seven air changes per hour sounds like respiration, to me.  0.6 air changes per hour sounds like a call for life support.

Like I say, not my area of expertise, and I have nothing against improved energy efficiency, but I'm left wondering:  what are we rushing towards, and why are we in such a hurry to get there?

Having said that, I found this:  Ta-Nehisi Coates in Paris:

There is almost no air conditioning -- not in the homes, not in the offices, not on 99 percent of the subway trains. The windows are actually open on the subways. There's no ice in the water or in any of the drinks and I don't ask for any. Travel isn't colonization. I think that discomfort is life unbound. But because of that discomfort, that constant sheen of sweat, finding a naturally cool place is a divine experience. That day when I stumbled into Shakespeare and Company's reading room, it was like stumbling into an undiscovered oasis, like finding lost treasure.

Granted, Paris is much further north than most of North America (just for comparison's sake, Boston is at 42 degrees north; Paris is at 48 degrees north), and Houston is south of New Orleans; and Washington D.C., where the house is, is more South than North.  Still, Mr. Coates has a point:  "...discomfort is life unbound."

I wonder if we should think a bit more about that.  And Mr. Coates addresses that, too, in what I think is just the right way:

If Americans love choice, if we love our air-conditioning, and our ice, if we love our comforts, and our elevators, the question should not be, "How do we change?" for that too is a kind of colonization. Better to ask "Why do we love those things? How do they profit us? What we do we stand to lose should we abandon them?"

Yes; yes, that's the question. Oddly enough, the very questions I learned to ask in seminary (though they're hardly peculiar to Christianity).  But that's the way I learned to understand my religious convictions.  "Why do we love these things?  How do they profit us?"  Those are the best (and the most subversive) questions of all.