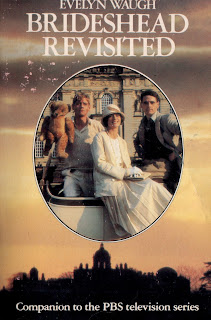 Oh, Teddy!  If only stuffed animals could feel Catholic guilt!

As Charles Ryder said to Lady Marchmain, the God she said gave commands to her and her family was purely a product of her desires; she decided what should happen and said it was God's will.*  It's an old and fairly valid critique of Christianity, and it would seem to support John Caputo's critique of Christianity, as well as the critiques Caputo relies on, of Bonhoeffer and Kierkegaard.  But in reality, it proves such critiques weak and ill-informed:

Bonhoeffer posed [the] possibility of a religionless Christianity while living out the final days of his life in a prison cell, before his martyrdom for his involvement in an assassination plot against Hitler. As such, his words had an added moral credibility, especially by those like the death of God theologians who were troubled by the moral ineptitude, if not outright complicity, of the church. For Bonhoeffer, this effort at purging Christianity of the comforts of religion would be a risky faith without assurances, one that severs the ties between Christ's call to discipleship and Christianity's association with the offices of power and the religious identification with the cultural trappings of civilization...

[Soren] Kierkegaard, like Bonhoeffer and the death of God theologians who followed, gave voice to the new anti-institutional, individualized Christian faith that stood in opposition to the easy alliance between religion and society. It was a radical faith purged of any vestige of authoritarianism and triumphalism that was unafraid to call into question the very meaning and purpose of the church both by being willing to admit the failure of its own tradition and by seeing the great success of the state churches as their great failure. In other words, for Kierkegaard, the apparent Christianization of culture and politics made it virtually impossible to live up to the radical existential demands of a truly biblical faith.

That position is supported by this argument:

...[O]n the one hand, serious philosophy and theology involve a work of ceaseless critique of our capacity to deceive ourselves. They reminds us that everyone is on the same footing, that no one enjoys privileged access. This has a salutary ethical ethical and political import because it shows us that we're all in this together and nobody is hardwired up to the Secret. That produces a desirable ethical, political, and religious effect--an egalitarian effect.

But I think that philosophical and theological thinking have to be--beyond critique and uncertainty--affirmative. If all there is to thinking is critique and delimitation, skepticism and doubt, then it will not inspire us. It will simply be disruptive and negative. So I think that philosophy is always looking for a way to articulate what we love, what we desire, what drives us. That is the Augustinian side of my work, which is emblematized by what Augustine calls at the beginning of the Confessions the cor inquietum--the restless heart. We write with both hands. Radical critique and delimitation is the left hand, but the right hand is the affirmation of something that we desire with a desire beyond desire, which is the sum and substance of my argument in Prayers and Tears, which conceives of praying and weeping in a deeply affirmative way. Something can be affirmative--we can say yest to it, for that is what we love--without being positive. That is to say, we may lack a positive formula for what we affirm. Whenever someone erects a positive content, making our affirmation into a determinate object, that can always be deconstructed. Whatever is constructed can be deconstructed, otherwise it is a menace or an idol. But the affirmation itself is irreducible. So I would say philosophy--philosophical and theological thinking, really any kind of thinking at all--has to be driven by a radically affirmative energy, by a desire for what is undeconstructable.

Which is perfectly sound, but leaves out the most important question:  where does this relentless critique come from, if not from outside the individual?

Consider:  Lady Marchmain is a Roman Catholic; she is, in fact, "more Catholic than the Pope."  A perhaps understandable condition, living as a woman of great importance (Brideshead makes Downton Abbey look like a country manor house) in C of E England.  But she has her own chapel, where she leads her children in prayer daily.  She has a "kept" priest who clearly never dares to contradict her on anything.  She has, in other words, no institution to keep her in check.  If she represents a state church because her position in society makes her virtually a part of the state, how would even a religionless religion change things for her?  The hierarchy and weight of the Roman Catholic church is not behind her:  she creates, as Charles rightly observes, her own ideas of what God's will is, constructed out of bits and pieces of church doctrine but mostly out of Lady Marchmain's own preferences. She already has her "religionless religion."  And where is her salvation?

There is a simple and wonderful truth here:  "Whatever is constructed can be deconstructed, otherwise it is a menace or an idol."  And the corollary, like a kind of Murphy's Law, is that is will be deconstructed; if not by philosophy, then by life itself.  Lady Marchmain's personal views are cruelly deconstructed by events of the novel, and she dies without knowing that there was a kind of reconstruction of her family, a reclamation, but it was achieved not by her strength of personality, but by the persistance of the Roman church.  And in the end the Roman church doesn't even have a direct involvement in the turn of the family:  it is their adherence, even by Lord Marchmain who has lived in Italy hating the Church, to the teachings of the Church.

Which, yes, is Waugh's preferred ending as he was a Roman Catholic among the Anglicans; but if praying and weeping are indeed deeply affirmative (and I think they are), they do not become affirmative because of radical individualism.  Indeed, that way lies the TV evangelists of America.  Radical individualism is what produces the know-nothingism of American culture, the idea as Isaac Asimov described it, "that democracy means that 'my ignorance is just as good as your knowledge'."  So Bonhoeffer and Derrida may imagine a religion without religion, but they do so from the relative comforts of European culture; those of us in America who have seen that experiment first hand shudder with recognition, and withdraw in horror from the very idea.  Praying and weeping have to be, not public acts meant to inspire sympathy; but private acts, meant to humble and make us truly vulnerable to something outside of us.  And where do we go to test that experience, and understand it, if not to a group, a community of some measure or another; and, in the case of a spiritual experience, to a religious community?

Unless Mr. Caputo is suggesting we set up philosophy as that church of which all can be members.

*I saw the most recent film version of Brideshead Revisited on T.V. recently, so I'm going from memory.  My copy of Waugh's novel, with the PBS tie-in to the John Mortimer version (far superior to this more recent one) cover seems to have been lost in the sands of time.