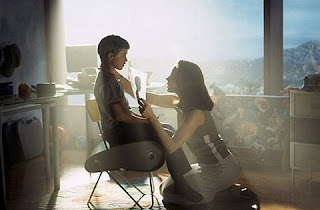 I've been sorting a few things in the old mental attic, as will become clear eventually.  It will also make sense of this post, hopefully.

In the largely overlooked movie "A.I." (which does suffer from too much Spielberg and not enough Kubrick), robots have become ubiquitous and all but human.  Jude Law's character is a robot gigolo, who is "alive" enough to seek self-preservation when he is framed for murder by a jealous husband; but, rather like a psychotic who can't quite grasp the reality of the situation, it is hard for him to recognize that the murder victim's blood indicates a rather serious problem.

Which is pretty much in keeping with the robots in "A.I."  They are tools, designed for a purpose, and responsive only to that end.  In the middle of the film, when Haley Joel Osmet's "David" encounters a "Flesh Fair," it is a scene from robot hell (if robots could have a hell; but, not being "alive" they can't, really).  It is a sort of demolition derby for obsolete robots, some of whom, like discarded pets, wander the countryside looking for the work they were designed to do.  The robots are destroyed in elaborate manners, and all uncomplainingly.  Uncomplaining, that is, except for David and Jude Law's character (it is where they meet).  Law wishes to evade destruction, but has no idea how to do so.  David, who thinks he is human (it is the central conceit of the film; he represents a new model of robot, one designed to replace children lost in childhood to accident or disease), of course needs to escape.  He and Law's character manage the feat, and travel together until David finally reaches his destination:  the Blue Fairy, from Pinocchio (see?  Too much Spielberg), whom David fervently hopes will make him into a "real" boy.

I put "real" in quotes there because that's the other central issue of the film:  from the moment David is "switched on", is he not real?  David arrives as an ordinary robot, one fitting a programmed function.  With the right set of code words, however, David can be "switched on," and the programming that makes him mimic humanity, makes him appear to be a "real" boy, takes over.  The transformation in Osmet's face and demeanor is one of the few truly Oscar worthy performances I've ever seen.  Every time I see it, it takes my breath away.  But, then, that's just a subjective response, and the Academy never listens to me.  Anyway....

David is human; but he isn't; and finally his "mother" (owner is more accurate, but not to David, or her) takes him back to the factory.  But, on the way, afraid he will be destroyed, she sets him loose in the woods and tells him to run away, and avoid humans.  Imagine a mother doing that with her biologically human child, and the child's uncomprehending response of fear and abandonment, and you know how that scene goes.  It ends with her racing away, David visible in the rear-view mirror crying in anguish.

The quest of the film is David trying to find out how to become a real boy.  But isn't he real already?  Isn't he, in fact, a cruel trick of his creator, a Frankenstein monster cut off from humanity not because of his ugliness, but because he isn't organic, he's "mecha" (in the terms of the film).  And why does mecha not have existence?

Mecha, in the fictional world of the film, exists; just as this computer exists I am typing on.  But mecha doesn't have existence, any more than this computer does.  Why?  Because it is not fully human?  Because it doesn't feel as humans feel, reason as human reason, function as humans function?  David threatens the life of the human child in his family, a child who unexpectedly awakens from a coma, a child David was meant to (ostensibly) replace (his father works for the robot company; David is more experiment than purchase).  He doesn't mean to be a threat; but he isn't biological, so he doesn't understand mortality as even an 10 year old can learn to understand it.  Is he irretrievably mecha?  It's very hard to say he is by the end of the film.  It's easy, from the first scene with David, to say he exists.  But does David have existence?

The Flesh Fair, where the robots are destroyed, is meant to be a bit heart-wrenching, and not just because David is threatened.  We have a hard time seeing the robots as merely mobile toasters the way the audience and the owners of the Flesh Fair do.  That isn't accidental, of course; this is Spielberg, not Kubrick.  But we sympathize with them because they don't only exist, but they seem to have existence:  even though that existence is clearly simply programming.  One robot, built to be a nanny, responds to David as if he were a child she should care for.  But she responds as a machine would respond:  it is a programmed response, not a human one.  David's reactions are human, but he is mecha.  He is real, but he does not have existence.

Why the dichotomy?  And what does it say about our ideas of existence, and what exists, and how it exists?  We mean something different when we say a desk exists than when we say a person exists:  but what do we mean?  Actually, we mean the desk exists, but does not have existence; a person who exists does have existence.  But then they cease to exist and they no longer have existence.  Why?  What has been lost, and where did it go?  And how did they have it in the first place?

When a person dies we say the body still exists, but the person does not.  What do we mean? Why do we say that?  The answers have a great deal to do with how we understand the property of having existence; but they also indicate a great deal of confusion over the topic that we never really grapple with.

Consider:  which is more important to me?  The nature of my existence, or the operations of an internal combustion engine at the molecular level?  I've read a description in an engineering text of the process of combustion at the molecular level in gasoline engines.  The explanation is technical, but still largely easily understandable.  This is because there is a precise vocabulary available to describe such things.  But what vocabulary do we have to discuss the nature of being, of existence, of the difference between existing (as my computer does) and having existence (as I would argue my cat does)?  It is of far greater importance to me that how molecules of gasoline act under pressure when exposed to a spark, but far less energy has been expended trying to understand it.  The words we have for it are as clumsy as those Wittgenstein derided.  We can get no closer than to accept "existence" as a thing that involves or is a property of other things, but only when those things are animate, and even then, only when they are animal (at least); otherwise, and even with that, we go blithely on our way.

Which is fine, in general; until some blithely decide "existence" is a key criterion of being "God," and without further elaboration demand it be proven before anything else about God can be discussed, and yet never offer even the first hint of what "existence" would mean, or how it would be established.  It is not that their claim is so important; but if they are going to insist that it is, I'm going to ask:  what, precisely, do you mean?  So I'm back to David, in the fictional world he inhabits:  does he have existence, or not?  Is he just a cat?  Or is he something more?

I make the cat reference specifically, because it is something Descartes, the father of modern philosophy, would deny to animals; and in much of Western culture since Descartes, we still cling to that idea.  Cows may have existence, but they deserve to lose it for our hamburgers.  They are like the mecha at the Flesh Fair:  their eyes may move us to compassion, but society at large wants to eat.  In the movie (it's Spielberg, after all) the question of David's humanity, of his having existence, turns on David's ability to evoke compassion from humans:  his mother weeps as she drives away from him; the audience at the Flesh Fair is convinced he's human, not mecha, because he cries; in the end, if he becomes "a real boy," it's because the aliens who thaw him out feel pity for him.  Then again, it's a movie, not a philosophical treatise.

Which returns us to the atheist demand for proof of God's existence.  It's really a demand for an individual for which one can feel compassion, where "compassion" is understood as something like a common passion.  David, in the movie, is human to the extent he feels.  He is, in the beginning of the movie, a danger, because he doesn't understand mortality (nor is he at risk of it).  But the whole of the movie after his mother decides to return him to the factory, is about how David can feel.  Perhaps that is the missing link, after all:  how can you feel compassion for something you cannot feel at all, that you cannot know intellectually or emotionally?  The psychological (but not spiritual) question then is:  why are the atheists so driven to care about a question so obtuse?