Pounding my own drum until it breaks.... 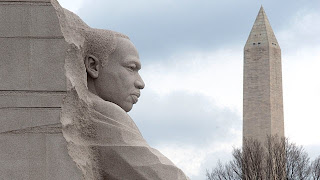 50 years later and the March for Jobs and Freedom in Washington, D.C. is still largely known as the "March on Washington," and for the "dream" Martin Luther King, Jr., had.

You'd never know anybody else spoke that day, nor that the first part of King's speech was about social justice couched in starkly economic metaphors, and not just about the sons of slaves and the sons of slaveowners one day holding hands (the part we'd all like to get to while skipping over the intervening economic and social justice it takes to get there).

It is interesting that the full title of the March is at least being bandied about in some quarters.  Although no one is yet making the connection to 1968, and Dr. King being in Atlanta to advocate for striking garbage workers.

His civil rights struggle was always also a struggle for economic justice.  But we've made sure, in 50 years, to keep the focus on race ("We won!  We won!") and away from economic justice ("Don't mess with free markets!")  Where your treasure is, there will your heart be also.

DAVID BROOKS: Well, let me play at the positives, because I want to ask you something Congressman Labrador just said. We are still an amazingly talented country. You go to schools, you've got kids named Juan Hernandez Goldberg floating around there, mixtures of all these different ethnicities. We're really tolerant compared to other countries. And we still have these fantastic stories. I just had lunch with a woman named Katie who was from a not great family, she's homeless, spends part her time homeless, decides she's going to enlist in the navy, the enlistment officer says, "No, you shouldn't enlist in the navy, you should go to Annapolis." She graduates this year number one academically in her class, she gets a Rhodes Scholarship, she runs track, she's a Marine. You run across these stories all the time and they still are endemic to the way we live.

SHERYL WUDUNN: There's no question that those inspiring stories still exist. The question is, is there a generation where too many people are not having that inspirational moment? I grew up in the World War II generation. There's a reason why that generation-- my father had an eighth-grade education. He left work because he was orphaned. He had a mathematical ability, he became a bank examiner, we had a house in the suburbs. I was part of a whole generation in the '50s that moved up together, why? There was full employment in World War II, there was the G.I. Bill of Rights, there was an income tax that was passed, there was a sense of commitment at that point to bringing that generation, going, "That's eroded." And it started eroding in the '70s and the '80s for the middle class and the poverty. It doesn't mean that you always have these wonderful people that come up. But how many people with talent are not being realized? Lincoln used to be haunted about a poem of a person who had great talent and was in his grave in an unmarked grave because he never had the chance. And there's too many of those kids without chances.

DAVID BROOKS: All of these realities are true.


And thus do we solve our problems.  With hopeful stories of particular individuals, and sweeping generalizations that aren't allowed to contradict anything we want to believe is true, or that point us in a direction toward real change.

This is what still passes as the national discussion on race and economics.