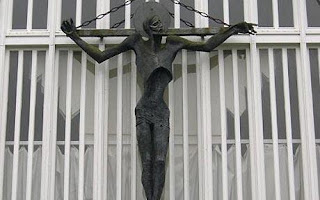 "This is not what I wanted!"

While I'm on the subject (I'm not, but I need to be), are moral (or ethical, I'll take them as the same thing here, though I think they are different) systems about punishment?  Or about right outcomes?

Let's start with that distinction I didn't want to make:  Aristotle's "ethics" were really an "ethos," which is to say, what do most people do?  What's the custom around here?  Basically Aristotle said, in the Nicomachean Ethics:  find a successful person in your community, and do what they do.  Then you will be happy, because that is the telos of ethos:  to be glad you behaved the way you did.

Not really a lot of morality there, though.

Of course, we sort of think of "ethics" as what we ought to do, and morality as what we'll get punished for not doing.  So "ethics" is almost legal:  stay within the lines, don't get caught crossing a line, don't do anything that would get you investigated for crossing a line (like, say, a Walter White, or a Dexter), and you're fine.  You are "ethical."

Moral?  Keep even your thoughts clean, because God will judge you on what is in your heart, when the day of Judgment comes, when the last Trump sounds, when the whistle blows and we all have get out of the pool and line up for inspection:  sheep on one side, goats on the other.

That's more or less how we think of it, when we think of it at all.  Ethics is what you should do, mostly to avoid trouble; morality is what you should do so you avoid punishment; or at least so you can live with yourself.  Ethics you can fake; morality, you have to be sincere about.  Iago is ethical, within limits; but he is certainly not moral., even if, in the end, he doesn't get away with his legal (ethical) violations.  Ethics is what we want to do; morals is what we ought to do.

Ethical is how we behave; morality is how we ought to be.

Alright, so what's the point of all this?  Well, it's a question of expectation:  do we behave ethically because we expect a reward?  I don't think so.  It's more so we can avoid punishment.  Morality is more popularly tied up with rewards:  the moral person goes to heaven, the immoral person:  doesn't.

But that means both are about punishment.  Back to Aristotle:  you don't get punished for not behaving ethically, but you don't get the desirable outcome, either.  The idea of a punisher waiting for you to go wrong is one we associate with the Hebrew Scriptures; but that's an entirely inaccurate picture.

When the Exile falls on Israel (an event overshadowed for Israel only by the Exodus), it isn't because God is pissed off and has decided to punish everybody for not dotting their "i's" and crossing their "t's" in the prescribed manner:  it is because Israel has so violated the terms of the covenant that God now leaves them to the fruit of their own devices.  When God relents, it isn't because Israel has suffered enough and can again earn God's love and protection; it is because God loves Israel and has Israel's attention, and tells Israelto just get back on the right course:  "And what does the Lord require of you, but to do justice, love mercy, and walk humbly with your God."  There isn't anything there about strict observance of the Torah, or a pecksniffian interest in how ritually clean the bowls are:

Your countless sacrifices, what are they to me?, says the Lord....Who asked you for all of this?....Wash and be clean; put away your evil deeds far from my sight; cease to do evil, learn to do good.  Pursue justice, guide the oppressed; uphold the rights of the fatherless; and plead the widow's cause."  (Isaiah 1: 11, 12b, 16-17, REB)

The message of the prophets is consistent on this point:  do justice, love mercy, uphold the poor and take care of them; then all is right in the land.  The law of Moses is not meant to be a handbook of strict regulations, the violation of any word of which brings down divine wrath on the nation.  It is meant to tell you how to behave, so that all will be well with you.  It is, in that sense, ethical; not moral.  It is meant to be followed because it leads to a good outcome for all; not because God is waiting to pounce on the least infraction and bring down punishment for an immorality.  The point of ethical behavior is always to live a life worth living.

I come at this from this review of Zealot by Reza Aslan, on which I'll have more to say later.  The review ends with this odd admonition:

But the better story in Zealot is the cautionary one, warning us against turning away from this world, against shrinking in the face of power, against making gods out of good men and women. These are the people we need. And we need them here. Because like “Jesus the man” — as Aslan concludes — it’s people who are “worth believing in.”


The concept (or rather misconception) of power is what I find odd there.  But it's preceded in the essay by this assertion:

My sense of who Jesus was — an illiterate peasant and radical preacher born in Nazareth, who died at the hands of Rome and was left on the cross to be devoured by animals — says a great deal about what Jesus means to me. In short, Christian ethics are entirely of this world and a threat to worldly power.

Put them together and everything important comes from us, and returns to us.  Which is not the inspiring message Scott Korb thinks it is.  But more interesting to me is the idea that Christian "ethics" are a threat to worldly power.

I suppose so, but only if we are living as the first Christians did according to the Book of Acts.  And then, even if we did, only a handful of people would really do so, and it would be just another sect of Christians no more threatening to the world order than the mainline denominations are now.   But how could Christian ethics threaten worldly power, if they were just the proclamation of a community that chose to live by them?  That, after all, is all the Hebrews, and then the Jews, ever claimed about their laws:  the laws apply to the members of the covenant with Abraham, not to all humankind.  Do Christian ethics apply to one and all?  Or do they only apply to those who confess Christianity?  And if they do, am I punished by God for not keeping them exactly as God intends (and how is that?).  Or am I simply foolish to walk away from guidelines that will keep me on the path to happiness (provided my name isn't Job)?

Here's where the ethical questions come in:  if  people are worth believing in, then Aristotle's ethics is the right one:  do what the community does, and you will be happy with the results.  And so I can ignore the poor, the homeless, the suffering, because my community finds it to be perfectly ethical for me to do so.  Some charity will do something for them; some government program will get them food; what is it to me?  I can live a perfectly ethical life ignoring their problems; I have problems of my own.  Charity begins at home.  I must think first of me and mine.  That's perfectly ethical.

And it is.  It could also be perfectly moral, in that you won't be punished for it in the sweet bye and bye.  Well, according to Mr. Korb, how could you be?  There'll be no one at "the end" to do the punishing.  But what if morality is not about punishment?  What if it is about something transcendent, transcendent even of society and ethics?

And wouldn't that transcendency, whatever it is based in, be the real threat to worldly power?

And now I must say that if I contemplate what Ethics really would have to be if there were such a science, this result seems to me quite obvious. It seems to me obvious that nothing we could ever think or say should be the thing. That we cannot write a scientific book, the subject matter of which could be intrinsically sublime and above all other subject matters. I can only describe my feeling by the metaphor, that, if a man could write a book on Ethics which really was a book on Ethics, this book would, with an explosion, destroy all the other books in the world. Our words used as we use them in science, are vessels capable only of containing and conveying meaning and sense, natural meaning and sense. Ethics, if it is anything, is supernatural and our words will only express facts; as a teacup will only hold a teacup full of water and if I were to pour out a gallon over it.

There is your threat to worldly power:  to understand ethics (I might substitute "morality") as something of substance, something real, and also something transcendent, beyond the expression of language; something so real that if it could be truly expressed, it would explode language (for what else are books made of?).

There is, in the final analysis, no threat to worldly power from worldly power:  there is only a threat to those claiming to have the power at any given moment.  But power is fickle; it changes partners and changes hands at its own whim, and no one who claims to wield it ultimately has control of it.  "Look on my works, ye mighty, and despair."  The powerful fade, power lingers on, finds a new repository, shatters that vessel or outlives its sheath, and continues.  The only response to power is with the power of powerlessness.  Morality is not about power; it is about doing what is right; and doing right not no matter the consequences, but simply because it is right.  In the short term if it seems to fail, in the long term it will win; it will prevail.  Power will one day be exhausted; powerlessness cannot be.  "Blessed are the meek, for they shall inherit the earth."

Are those the people worth believing in?  Aslan, according to Korb, thinks the worst thing that happened to Jesus of Nazareth is the story of his resurrection.  Why?  Because it robbed his message of power; because:

Jesus’ usefulness as a challenge to power was lost the moment Christians first believed he rose from the dead. For Aslan, that’s been the worst consequence of the most consequential life ever lived.

But the challenge to power never outlives the power being challenged.  And what life could be more consequential than the life of a Mediterranean peasant whom we are still talking about 2000 years later?  Are we not doing so precisely because the first Christians believed he rose from the dead?

The rest of us should suffer such a consequence in our otherwise inconsequential lives.