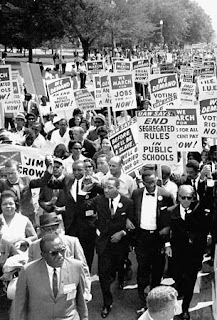 I have this desperate need not to gloss over recent history;

May 17, 1954:  The U.S. Supreme Court declares "separate but equal" unconstitutional.

January 1957:  Following the success of the Montgomery Bus Boycott, Dr. Martin Luther King, Jr., C.K. Steele, and Fred Shuttlesworth form the Southern Christian Leadership Conference.  "As early as 1962 SCLC began to broaden its focus to include issues of economic inequality...[s]eeing poverty as the root of social inequality...."

May 17, 1957:  The SCLC leads the Prayer Pilgrimage for Freedom, to urge President Eisenhower to push harder against the slow implementation of Brown v. Board of Education.   Dr. King's speech is "Give Us the Ballot."

April 16, 1963--Dr. King's "Letter from Birmingham Jail"  "We know through painful experience that freedom is never voluntarily given by the oppressor; it must be demanded by the oppressed. Frankly, I have yet to engage in a direct action campaign that was "well timed" in the view of those who have not suffered unduly from the disease of segregation. For years now I have heard the word 'Wait!' It rings in the ear of every Negro with piercing familiarity. This 'Wait' has almost always meant 'Never.' We must come to see, with one of our distinguished jurists, that 'justice too long delayed is justice denied.' "

August 28, 1963--March on Washington for Jobs and Freedom.  "Those who have said be patient and wait — we must say that we cannot be patient,  We do not want our freedom gradually. But we want to be free now."--John Lewis

Fall, 1970:  16 years after Brown v. Board of Education, the "separate but equal" black high school in my hometown is finally closed by Federal court order, and the school year begins with the integration of the two remaining "white" high schools, and all other schools in the district.

June 21, 1974:  Schools in Boston are ordered to desegregate.  " White parents stage a boycott, pulling their children from the schools. The violence persists inside and outside the schools, and white resistance continues for years. Not until Louise Day Hicks is unseated and a black school committee member is elected in 1977 will the situation start to stabilize."


Just a trip down some of memory lane, to show the "dream" was not at the end, or at the beginning, of Dr. King's struggle for justice.  It wasn't even the sum total of that day in Washington. And justice is not imaginary, something merely dreamed of.  Starting with Rosa Parks, this is all within my lifetime. Unfortunately, so is this:

Conservative radio host and Fox News contributor Laura Ingraham attacked the speakers at the 50th anniversary of Martin Luther King, Jr.'s "I Have A Dream" speech, at one point using the sound of a gunshot to cut off a sound bite of civil rights leader Rep. John Lewis (D-GA) -- a man whose skull was infamously fractured by a state trooper on "Bloody Sunday" in Selma, AL, in 1965. Ingraham used the speech's anniversary to race-bait about black-on-white crime statistics and hosted Pat Buchanan to bemoan the idea that minorities face any higher level of adversity in America 50 years later.
....
On her August 26 radio broadcast, Ingraham criticized the event and its speakers, saying the goal "was to co-opt the legacy of Martin Luther King into a modern-day liberal agenda," and scoffing at the topics speakers supposedly discussed: "From gay marriage, to immigration -- amnesty, was thrown in for good measure. We talked about the Voting Rights Act."

Ingraham ran through a list of African-American crime rates before hosting Pat Buchanan, a prominent racist with white nationalist ties. Buchanan dismissed the idea that minorities suffer any disadvantages in contemporary America, calling the idea "absurd" because "black folks excel and are hugely popular figures in everything from sports to entertainment to athletics to politics. Everywhere you go ... So the progress has been enormous."

In the 1960's, we told African-Americans to "wait."  Now we tell them to quit talking about race.  So the progress has, indeed, been enormous.

The unemployment rate among blacks is about double that among whites, as it has been for most of the past six decades.


I still don't understand why people like Ingram and Buchanan are allowed in decent company.

Dr. King not being treated as a liberal in his lifetime.