Touch my heart but stay 'way from my treasure 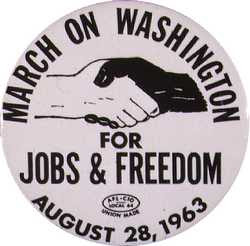 Jobs.  Or Freedom.  Which is it gonna be?

Charlie Pierce sorta noticed yesterday, but he made no specific reference to President Carter's speech.

NPR highlighted President Obama's speech, which I personally thought was the least interesting of those given yesterday.

These are editorial decisions and matters of opinion upon which reasonable minds can differ, so I'm not declaring all news outlets unmutual.  But it is interesting how these decisions are made, how the narrative of history is formed.

Because among the remarks former President Carter made were two quotes from Martin Luther King's father, "Daddy" King.  Jimmy Carter  reminded the crowd that "Daddy" King said the ghetto still looks like the ghetto from the front seat of the bus; and it doesn't matter if you finally get a seat at the lunch counter, if you can't afford lunch.

Bill Clinton, who followed, was careful to make no such mention about the legacy of Dr. King.  The audience sat resolutely on their hands while Mr. Carter mentioned those things.

They loved anything about "the dream," though.

So does the press, apparently.

Where your treasure is, there will your heart be, also.  And don't mess with my treasure.