Maybe if we just let them run the asylum.... 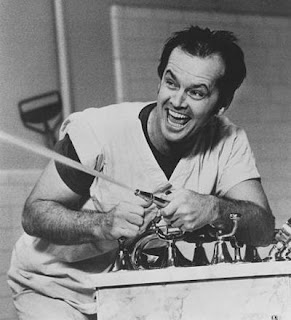 And O-U-T spells OUT!


Even as I type I am listening to Terry Gross interview an NYT reporter about a series on health care costs which she has written, and playing the slightly above average consumer of news that I am (I'm home during the day to listen to this; if it ain't on TeeVee at night, or even "All Things Considered" late in the day, I assume most people wouldn't know it.  Of course, it'll never be on FauxNews, but you'd be surprised who few people in the country actually watch FauxNews), this is news to me.


One striking example:  a man who flew to Belgium for a hip replacement, because he didn't have insurance.  Cost in the States for said replacement:  upwards of $100,000.00.  He said no thanks, and found he could get it in Belgium, so he flew there, spent a week in hospital, flew back.  Cost, as I say:  $14,000.00.  Nice for him, you say, he could afford the plane fare.  But the plane ticket is included in that cost.

Here, of course, we squabbled about Obamacare making healthcare available to non-citizens, 'cause we hate "illegal immigrants" comin' here just to take our stuff.  This man didn't enter Belgium illegally, true enough, but does anyone doubt the xenophobia behind the insistence that all "real Americans" are citizens of this great land?

But I digress:  even as we hear that Obamacare is going to be a failure and a clusterf*ck and that all the "Tea Party" cares about is defunding and destroying it and sending it back to the mouth of Communist hell where it came from (but keep government outta my Medicare!), I hear nothing, NOTHING about the cost of medical care in this country, or the cost to all of us of those people who are uninsured and who don't have the decency to just die and fall into an open grave and pull it in after them so we wouldn't be bothered with the cholera and other problems all those dead bodies would create because we cannot care for those who cannot care for themselves EXCEPT for the elderly who earned their Medicare by paying taxes for it! (although of course no one has ever been alive long enough to pay enough into Medicare to only get back what they paid in, but no matter).

And honestly, honestly, honestly, I don't get it.  I don't get the irrational fear of the other, I don't get the irrational fear of caring for each other, the irrational idea that if I care for you I'll be broke and you'll be broke, too, and then the apocalypse comes and we're all living in an urban hellhole scrambling for bits of rat to fry (oh, well, maybe I do).  I remember the imagined apocalypti of my childhood, all based on some type of nuclear war, but we escaped that fear and kept the fear of the future it bred in us; and now we're afraid AFRAID AFRAID!!!!!! of the future not because nuclear weapons were ever too expensive (is anything the Pentagon does ever too expensive?) but because people are too damned expensive and its the expense of all those OTHERS! that's going to destroy us  (but weren't the others always going to destroy us?  And isn't it scarier now because they really are under the (hospital) bed waiting to get us?).  And of course it's true, people are too damned expensive, because a hip replacement in this country costs 6 times what it costs in a small European country who may have even hiked the charges because the guy was not, you know, a Belgian.

Well, surely they did, in fact.  Because if they didn't, why, that'd be unAmerican!*

And she ends her conversation with Terry Gross saying she wants to get this information into the national conversation.  Yeah; good luck with that.  Soon as we quit listening to how the Tea Party is demanding the GOP defund Obamacare, maybe we can get to that.

Or not; Congress will be back in September, nobody's here right now to take your call, and besides, if it doesn't have to do with who's in and who's out in DC, nobody really cares, ya know?

*Speaking of which, now they are talking about the costs of pregnancy and how much the large print giveth and the small print taketh away in insurance policies, and I remember researching colonoscopies which must be covered by law in Texas, up until they find something (!), at which point it is no longer a preventive procedure but is now a medical procedure, and you know what?  You're on the hook for the costs now, Jack!  Sorry, that 100% coverage you thought you had just evaporated!

Is this a great country, or what?  God bless Amurika!