Buried in the ground 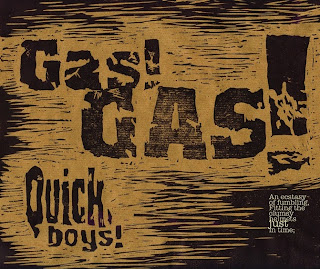 Get it while it's hot!


At the beginning of World War II, aerial bombardment of civilians was considered a horror that might, after that war, have been labelled a "war crime."


And then the Allies decided they had to do it to defeat Germany and Japan, and we got Dresden and Munich and Berlin and Nagasaki and Hiroshima and Tokyo and probably a lot of other places I can't call to mind just now.

Later we invented the concept of "carpet bombing" in Vietnam.  That was supposed to win for us, too.

Of course, prior to all that, both sides used "gas" during World War I, but it was so hideous:

Gas! Gas! Quick, boys! – An ecstasy of fumbling,
Fitting the clumsy helmets just in time;
But someone still was yelling out and stumbling,
And flound'ring like a man in fire or lime . . .
Dim, through the misty panes and thick green light,
As under a green sea, I saw him drowning.
In all my dreams, before my helpless sight,
He plunges at me, guttering, choking, drowning.
If in some smothering dreams you too could pace
Behind the wagon that we flung him in,
And watch the white eyes writhing in his face,
His hanging face, like a devil's sick of sin;
If you could hear, at every jolt, the blood
Come gargling from the froth-corrupted lungs,
Obscene as cancer, bitter as the cud
Of vile, incurable sores on innocent tongues,
My friend, you would not tell with such high zest
To children ardent for some desperate glory,
The old Lie; Dulce et Decorum est
Pro patria mori.


That we decided war was too hideous to talk of with such high zest, or to tell children ardent for some desperate glory "Dulce et Decorum est Pro patria mori."

Naahh!  Just kidding.  We only decided the gas was a terrible thing.

Today the U.S. deploys "daisy cutters" which are designed to suck all the of air out of the space reached by the bomb blast.  It's an "anti-personnel" weapon.  And we have bombs that drop mines on parachutes, "bomblets" that are designed to go off when touched or picked up, that are colorful and attractive to children.  There are stories Israel has used such bombs.

But gas is horrible and terrible and must never ever be used again.  Not land mines; not bomblets brightly colored and rained down as anti-personnel weaponry; not even "daisy cutters" or "neutron bombs," which are meant to do less property damage than "regular" nuclear bombs, but with more effective killing of living things.  Gas is the weapon we cannot tolerate.

Gas, said Sec. Kerry today, is the reason we must punish, or bomb, or do SOMETHING to Syria.  Gas.

Gas is reprehensible.  Other ways of killing lots and lots of people quickly and easily, be they soldiers of be they civilians; the deaths of all those people during "shock and awe" in Iraq, for example:  well, they didn't die from gas, did they?

That's just the cost of freedom, isn't it?