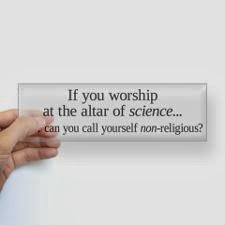 
The major problem here is that Jerry Coyne is really not terribly well informed on the subject he addresses.  He makes sweeping assertions about religious faith that pretty much rest on defining faith as William James said most people erroneously define it:  "when you believe what you know ain't true."  He does start off with slightly better language by quoting Walter Kaufman, who is about as much an authority as Carl Sagan on astronomy:  a good popularizer, but not really the solid authority you want to go to.  Faith, per Mr. Kaufman, is:

intense, usually confident, belief that is not based on evidence sufficient to command assent from every reasonable person.

Coyne can't resist going James' imagined young boy one better, though:  "To state it bluntly, such faith involves pretending to know things you don’t."  I think William James did a better job of saying the same thing.  And James had the decency to point out that's about the poorest definition of faith available, and not not ascribed to by most believers.  And I'm sure "such faith" does just as Mr. Coyne says; what I'm not sure of is such a definition of faith has anything to do with what most believers mean when they use the term.

Coyne's argument rests on the erroneous (and unexamined, at least by him) assertion that there is only one epistemological theory to explain "valid" knowledge, and that theory rests on some version of empiricism.  He even ends his argument with a quote from Richard Dawkins, a quote that goes to the more fundamental question of epistemology and which knowledge is best, although Coyne doesn't seem to realize this.  The distinction Dawkins introduces (even as Coyne insists it is invalid, because there is only one valid source of information) is between that which is discovered (the standard of empiricism) or that which is revealed (the standard of religion):

There is a very, very important difference between feeling strongly, even passionately, about something because we have thought about and examined the evidence for it on the one hand, and feeling strongly about something because it has been internally revealed to us, or internally revealed to somebody else in history and subsequently hallowed by tradition. There's all the difference in the world between a belief that one is prepared to defend by quoting evidence and logic and a belief that is supported by nothing more than tradition, authority, or revelation.

Yes, there is a difference; but saying one of these things is not like the other, is not simultaneously saying one of these things is better than the other.  All Dawkins, and Coyne by using him, have established is that science and religion are like chalk and cheese.  They haven't established a hierarchy, although they desperately want to.  As for the differences between such beliefs as Dawkins speaks of, I sincerely hope he doesn't rule out any love he has for his wife because he cannot defend it by quoting evidence and logic.  I would hope that belief, at least, is based on revelation and  internal knowledge.

The conflation of faith as “unevidenced belief” with faith as “justified confidence” is simply a word trick used to buttress religion.

First, he's trying to use Wittgenstein's concept of "language games" without ever invoking the rigorous analysis of Wittgenstein.  That rigor, of course, would stop Coyne's analysis in its tracks, and send him packing.  Nevertheless, the trick employed here is not a conflation of terms, but the conflagration of a straw man.  Faith as "unevidenced belief" is not an illusory form of knowledge (because empirical knowledge is not the only valid form of human knowledge), nor is that even a valid definition of "faith" in a religious context.  Having erected his straw man on little knowledge, study, or investigation (one presumes that, like Dawkins, Coyne sees no reason to educate himself in a subject before presenting his ignorance about it), he sets it on fire and declares himself the victor of a race only he is running.  But that's not the worst of it, either.

Scientists give no special credence or authority to books, either, except insofar as they present comprehensive theories, novel analysis, or verified truths. When I became an evolutionary biologist, I was not required to swear to the truth of Darwin with my hand on The Origin of Species. Indeed, that book was wrong on many counts, including its fallacious theory of genetics. In contrast, many believers must regularly swear adherence to unchanging and dubious religious claims (think Nicene and Athanasian Creeds), and many ministers swear to uphold church doctrine.

The first sentence is sheer balderdash.  Science no more reinvents the wheel every generation or so than Christianity rest solely on what was written down in the 1st century C.E.  And when I was ordained as a minister I didn't put my hand on a book and swear to the truth of it, either.  Coyne is confusing ordination, or even baptism, with archaic courtroom dramas (nobody swears on a Bible anymore in court).  And "regularly swear adherence to unchanging and dubious religious claims"?  Aside from the many Protestant churches which don't recognize creeds at all (the Southern Baptist Convention being the largest of them), I grew up repeating the Apostle's Creed and the Nicene Creed until I had them memorized by sheer repetition, but I never once "swore" my "adherence" to them, or considered their claims either "unchanging" or "dubious;" at least not in the religious context.  Frankly, sometimes I thought about the claims of the creeds; sometimes I didn't.  Coyne has, in his work as a scientist, claimed adherence to unchanging and dubious claims as well; and those claims have changed not because science discovered new versions of the "truth," but because of paradigm shifts, as Kuhn has pointed out.

Science is as much philosophy as religion is theology; a point I've not doubt Mr. Coyne would find offensive to his empirical sensibilities.  But then many a believer I've met doesn't like to have the theological underpinnings of his or her belief pointed out, either.  Discomfort doesn't mean the disclosure is inaccurate.

Coyne's argument, in the end, comes down to special pleading.  Science is above such human concerns as "belief" and "faith," because science is pure and, dare I say it, heilige.  It is beyond reproach because everything it says is true and can be trusted.  However, as the great empiricist David Hume pointed out, all such knowledge is also quite pointless.  It can either tell us the obvious ("This stone is heavy."), or it can only tell us an unprovable synthesis ("This statue is pretty.").  If that's where Coyne wants to be left, I am happy to leave him there.

I feel compelled to point out he's left, not on the cutting edge, but somewhere in the mid-19th century.  If he wants to stay there with the evangelicals who believe the conversion of the Jews is necessary to the return of Christ, the group George W. Bush is addressing as I sit and type, I, for one, am happy to leave him there.

But I'm not going to leave him thinking he's describing the world the rest of us live in now.

Adding:  before I wrote the above, I wish I'd remembered I'd written this.  And the questions raise din comments there are worth going back to.   Hmmmm......