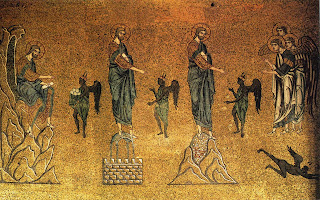 Was Jesus tempted in the desert?  Or not?

We can unfold the layers of this:  Matthew and Luke got it from Mark; John doesn't bother with it at all (as is typical of John v. the Synoptics.  There is very little in common between them, in terms of familiar gospel stories.  John doesn't even include a communion meal; his story focuses on Jesus washing the disciples' feet.)  And in Mark it's over so fast that if you blink, you miss it:

And right away the spirit drives him out into the wilderness, where he remained for forty days, being put to the test by Satan.  While he was living there among the wild animals, the heavenly messengers looked after him. (Mark 1:12-13, SV)

Mathew and Luke add narrative to that bare telling; and dialogue.  Tradition adds a lovely legend of the angels bringing Jesus soup from Mary's kitchen after the Devil leaves him.  Still, in terms of the later doctrine of the Incarnation (the generally accepted doctrine of the Incarnation was not settled until the 5th century), this prompts certain controversies.  Was Satan, for example, able to tempt God?  Or was Satan tempting the human Jesus?  And despite issues of hypostasis and homoousias v homoiousias (and the iota of difference between them), it's still a vital question, if you care to ask it.  And we should ask it, because it leads to what is perhaps the central mystery of Christianity:  is it possible to kill God?  (A blunter way of putting the issue Moltmann affirmed:  that God can be crucified.)

I ask because of this:

"Divinity belongs to the post-Easter Jesus, not the pre-Easter Jesus. To think of Jesus as divine actually diminishes him. If he was divine and had the power of God, then what he did wan’t all that remarkable. He could’ve done so much more.  But the classic Christian affirmation about the pre-Easter Jesus is not that he was God, but that he was the decisive revelation of God.  This is the cumulative meaning of the exalted language that Christians use for Jesus: in him, we see what can be seen of God in human life.”— Speaking Christian by Marcus Borg

If the classic affirmation about Jesus is that he was not God before the Resurrection, why have I not heard this before now?  What do you think?

Which prompted at least 150 responses on Facebook (now I know where everybody went!).   I'm not sure, exactly, just how "classic" this affirmation of the pre-Easter Jesus is; Borg likes to play fast and loose with theology (as do many of the more popular Biblical scholars) in order to affirm his own preferences (I wouldn't quite call them theologies, to be honest); but the nature of Christ (Christology) is a hot topic these days, and what Borg wants to affirm is not that controversial in Christological circles.   On the other hand, since the issue of the nature of the Christ wasn't really settled until the 5th century, it is fair to say there was more than one opinion on the subject for the first 5 centuries of the church.  That's not the majority of Christian history; but it's not a handful of days, either.

On the other other hand, who wants to hang out with a bunch of Christologists?

But to get back to the question:  was Jesus God, or human, in the wilderness?  Or did he swap the two natures back and forth as it pleased him or served his purposes?  Or is it really possible to tempt God with earthly comforts?  Was Jesus always fully divine, and fully human?  The narratives of Matthew and Luke have led us to think so.  But do they?  Gabriel announces the pregnancy to Mary, an angel to Joseph; but what they announce is a miraculous birth, a virgin conception.  They say the child will come from on high, that the holy spirit is responsible for the pregnancy, that the child will be the one to save Israel.  They do not say the child will be fully human and fully God.  And the canon rejected the Infancy Gospel of James, where the notion of Jesus the child as possessing the powers of God is explored, and Jesus' human side clearly exploits the powers of the God side; which raises even more interesting questions about homoousias and homoiousias.

Paul is the one responsible for the idea that Jesus became Christ after the resurrection, and because of Jesus' martyrdom essentially, his faithfulness unto death.  But Paul didn't foresee generations of martyrs, so when Stephen was stoned to death and then the martyrs were persecuted by Rome in the Coliseum after Paul (Luke's story from Acts is written after Paul, too), a reason both for their deaths and for their non-resurrection had to be constructed, and eventually Paul's emphasis on the crucifixion was replaced with the emphasis on the nativity.

And still the questions of the Incarnation are present and important.  Why haven't we heard about all this before?  Perhaps because 150 Facebook comments indicate a strong reaction against Borg's assertions.  Perhaps because we cannot recall ancient ideas in a modern context without stirring up responses we didn't count on.  Perhaps because when everything old is new again, the new is not as attractive as we imagined it would be.

Or perhaps because it's good to think about these things.