Houston, we have a problem.... 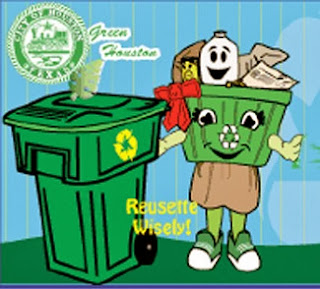 If a happy cartoon doesn't inspire you, what will?


My neighborhood is going from recycling buckets picked up by human beings, to recycling containers picked up by trucks (auto v. manual, basically).  To say it is not going smoothly would be an understatement.

You can probably see the problem already.

The letter that went out didn't say which date our old containers would vanish, and which date the new ones would be employed.  It didn't say which date because the letter was written for the entire city, and different neighborhoods get their recycling and garbage picked up on different days.  Instead, the letter indicated which schedule you were on would affect the schedule of the transition, and that schedule was, for this area, one of two.  You figure it out, in other words, based on the information in the letter, and respond accordingly.

Did I mention that when the new buckets arrived, a copy of the same letter received two weeks earlier was attached?  Communication was not the problem; although the letter read like it was written by a bureaucrat instead of a regular person.  It could, in other words, have been much clearer.

We've been through this before.  The City stopped picking up regular plastic lawn bags, and required all bags be decomposable, so the lawn trash could be mulched into compost.  Lots of black bags kept appearing at curbside and received lots of orange stickers explaining why they were left at curbside before everybody finally got the message.  It was easily six months, and probably a year, before that transition finally ended.

If this sounds vaguely similar to the minor freakout over the ACA that seems to be all D.C. can talk about, I don't think that's an accident.  Maybe a million people looked at insurance policies, but didn't commit.  A handful are complaining they can't keep pouring money down the rathole of the plans that are completely worthless, mostly because they haven't figured out yet that those plans are worthless (some more so than others).  I suspect if the City made recycling mandatory on the grounds it would save a great deal of landfill space, a lot of residents of the City would complain about the burden that put on them; never realizing the burden they put on everyone else by expecting whatever they don't want in their house to vanish with the least effort or attention on their part possible.

If we don't handle these changes well, it's not because the government is incompetent.  Indeed, as Charlie Pierce said this morning, almost all of this is on us.

Maybe that's why we complain so much about everybody else.