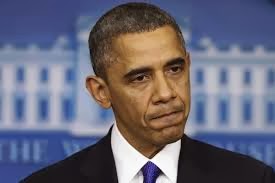 So this is what it feels like when you at least hope something is going to work out with a new government program, and you think, at least to yourself, that it isn't as bad as everyone says it is, and that even if a website doesn't work, it will, so why doesn't everybody just relax?

And then the President is the loudest voice shouting "FIRE!" in the crowded room where the cattle (all Congressional Democrats) are gathered and already starting to get so wide-eyed you can see the whites of their eyeballs, and you know the stampede is coming.

And so Obama fires off the pistol, just for good measure.

Screw it.  The ACA was a terrible idea that always depended on the kindness of insurance companies, or at least on satiating their greed with enough new customers they'd be more politic about how they run their business, but that moving part in particular was NEVER going to work, so here we are.  "Here" is where we were at the first of October.  Nothing has moved except Obama has made himself look as inept as possible (those tweets are not going to help him raise his approval rating in the future).  As Jonathan Chait said, nothing Obama said is going to mean anything; we're still waiting for that damned website, upon which apparently the fate of nations now rests:

Does Obama’s plan solve the policy problem of people losing their plans? Probably not — the main mechanism is to let Obama throw the blame to insurance companies (many of whom, as noted, originally threw the blame at Obama.) Does it solve the political problem of angry individual market customers? Again, probably not — many and perhaps most people won’t be able to keep their individual plans. Democrats also want the chance to take an affirmative vote to “fix” Obamacare, and an administrative ruling doesn’t let them do that. Obama’s announcement mainly leaves the law in the same place it’s been for a month and a half: waiting to see if the administration can fix the website.


In other words, more of nothing will happen, but at least the President caved before the Democrats in Congress did it for him; so there's that.

Sod it.  I'm moving to Bedlam, before it fills up.