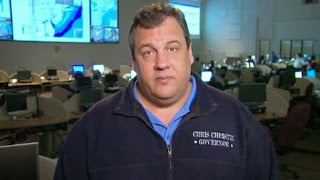 Doesn't that jacket sort of remind you of C-Plus Augustus and his Presidential socks?

I'm hardly the first to notice, but despite the conviction of Chris Matthews (who was absolutely petulant this week with a "guest" on his show who wouldn't affirm Matthew's gospel that Chris Christie is the Republicans Great White Hope and a shoo-in for the White House should he choose (Hah!) to run), but let me say what I was going to say earlier:  Chris Christie will never be President of the United States.


Not because he yelled at a teacher; but simply because he yells.  His answer to anyone who challenges him is:  "What do you people want?!"  That's not the answer of a statesman.  That's not the answer of a President.  This is not the behavior of a leader of the free world.  Anodyne and dull as he was, Mitt Romney inspired more confidence in his ability to take the stresses and pressures of the job than this.  Christie can't help himself.  I don't know what he thinks about what he's doing at times like this, but it is his political doom.

It will sell no better beyond the confines of New Jersey than Rick Perry's braggadocio about how Texas doesn't need the rest of the United States, especially them bureaucrats in DeeCee!

Three years ago, per Crooks and Liars,  Alex Pareene was saying Christie's bullying would win him supporters across the nation.  I don't think so.  I think JMM is right:  "He's a quintessential Northeasterner with a coarse version of the region's regional edge in a party dominated by the South."  Paul Theroux was just on NPR the other day talking about how very polite people in the South are.  We may like belligerence in Jim DeMint or Ted Cruz, but that's because they are belligerent Southerners (they do it politely, and to the right people; never to individuals.  Cruz has even apologized to some groups for the stupid things he's said.  Christie is proudly unapologetic about his bullying.)  Christie is a belligerent Yankee, and that sells about as well outside New Jersey as "Don't Mess with Texas" sells outside of Texas.  (We think it's funny, 'cause it's an anti-litter campaign by the state.  The rest of the country thinks we're serious, and misses the joke.  Draw your own conclusions vis a vis Gov. Christie.)

Yes, as Charlie Pierce noted, Christie is out as NJ governor as sure as 2014 is coming.  But he's not getting any nearer the White House than a public tour.  Stick a fork in him, he's done.