In Anticipation of St. Nicholas' Day 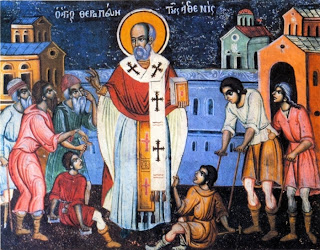 We cannot all be almoners, any more than we can all be saints.  But we need their example:

"Being an almoner, it has to cost me something so that it can change me," he said. He contrasted such alms-giving with, say, the unnamed cardinal who once boasted about always giving two euros to a beggar on the street near the Vatican.

"I told him, 'Eminence, this isn't being an almoner. You might be able to sleep at night, but being an almoner has to cost you. Two euros is nothing for you. Take this poor person, bring him to your big apartment that has three bathrooms, let him take a shower -- and your bathroom will stink for three days -- and while he's showering make him a coffee and serve it to him, and maybe give him your sweater. This is being an almoner."