Beauty is in the story of the artist.... 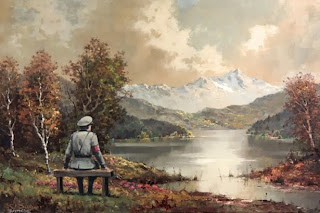 In my admittedly limited experience with art schools and art courses (including two I took in graduate school, art history, not studio!  You don't want me near an art studio....), I've been surprised by how much the instruction (at least) was tied up with narrative.  My unscientific conclusion is that art teachers are more obsessed with story than English teachers are.  Sadly, this only confirms that for me:

The landscape was originally painted by an artist named K. Sager. According to media reports, it had been purchased at a Housing Works thrift shop months earlier for $50. It reportedly was then altered and mysteriously dropped off on Oct. 29 at a Housing Works location in the city's Gramercy neighborhood.


That's where the story started.  Unfortunately for the charity, it didn't stay there long:


In another twist, Emling also said Bernardo shared with him an origin story of the painting that conflicted with the accounts given to the media at the time of the auction.

"They were in on it all along. They knew. Actually, Banksy's people actually contacted them saying, 'Hey, we're looking for a landscape piece, we want to paint a monster on it,'" Emling said.

"So the whole story about somebody buying it weeks ago and then somebody coming and dropping it off and telling them, 'I need to speak with the manager, you have a very expensive piece on your hands here,' isn't the case," Emling said.

There are denials and no doubt by now counter-denials; but the fact is, this is a "sofa painting" suddenly worth 6 or more figures because of it's story.  And without the story, it's a sofa painting again.

So:  is it art?  Did Banksy actually add value to it, or did the story of Banksy add the value?

Funny what people actually think they're buying; one seldom sees it made quite so plain.