"We Must Love One Another, or Die" 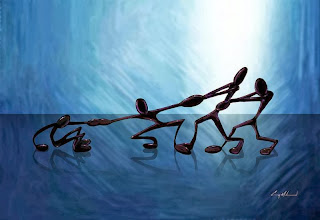 So here we are then:

If the Democratic Party continues to provide everything for a voter without encouraging some personal responsibility, I fear a gap between taxpayers and beneficiaries will open so wide that our government will not be able to repair the financial damages.

While I do not support the premise of Obamacare, I can fully understand the frustration of the unemployed, uninsured American. I cannot judge those who choose to use the program, for I know exactly what it is like to need it.


I really don't understand this reasoning.  At. All.  The "premise" of Obamacare is that a civilized society takes care of its members.  We might just as well worry about the gap between taxpayers and beneficiaries from sustaining fire departments.  Does Ms. Hurley imagine that injured and sick people who have no insurance are left to die in the streets, the better they should learn "personal responsibility"?  That we leave victims of motorcycle crashes with head injuries from refusing to wear a helmet to the tender mercies of their damage, so they can see what "personal responsibility" is all about?  That people who retire without savings because they were never wealthy, and for whom "retirement" is simply they are too old to be hired by anyone, too ill, too infirm, should die and decrease the surplus population, because "personal responsibility"?

Where do such pernicious notions come from, except from the idea that "they" are all of one kind and NOK, and "we" are all of another kind, among the Elect, and deserving of whatever human kindness we can give each other?  Are we really going to all become louts and layabouts because of Obamacare?  Is that what happened with Medicare and Medicaid and Social Security?  Shouldn't those people take personal responsibility and die if they are too old to pay their bills and too poor to pay for a doctor?

Being now among the unemployed and uninsured, suddenly Ms. Hurley has some empathy for the problem.  Don't expect her to keep it once she gains employment and reacquires insurance.  Not that Obamacare is limited to the unemployed anyway, or that insurance is a grant of employment enshrined in law.  Before Obamacare, more and more employers were raising the premiums for insurance so high coverage was shrinking rapidly. It will probably continue to shrink, albeit more slowly, under Obamacare.  If there is a Ponzi scheme afoot, a system which transfers wealth from the poor to the rich and provides less and less ROI (because it isn't an investment), it is health insurance, and I don't really believe Obamacare has altered that fundamental fact.

And speaking of "personal responsibility" and healthcare:

Half of veterans who are insured, but report only relying on the Veterans Administration for their health care needs, could also “qualify for Medicaid to supplement their VA care under the expansion,” the analysis found.

But many of them won't because they live in states which refused to expand Medicaid.  That'll teach 'em to be more responsible on the battlefield!

Maybe when none of us but the wealth can afford the "greatest medical care system in the world," we'll all finally understand what personal responsibility means.  Or maybe before that catastrophe, we'll start to reconsider just whether or not we MIGHT be our brother's, and sister's, keeper after all.