Brother, can you spare some ignorance? 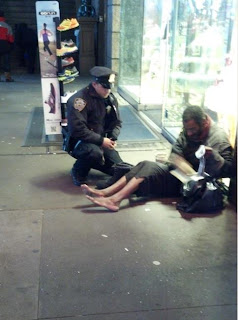 Giving this man shoes would just enable his poverty.

"The economic machinery that entrenches poverty" does not run without fuel; and is not a feature of natural law or the physical nature of the universe.  It is maintained and operated by human beings:

Donning a fake beard, Stossel sat on a New York City sidewalk with a cardboard sign asking people for help. “I just begged for an hour but I did well,” he said. “If I did this for an eight-hour day I would’ve made 90 bucks. Twenty-three thou for a year. Tax-free.”
Elizabeth Hasselbeck, who recently purchased a $4 million home in Greenwich, gasped in horror at the prospect of poor people earning $23,000 a year. Some people asking for money “are actually scammers,” Hasselbeck warned, seemingly unaware of the irony that the only panhandling “scammer” Fox News identified was Stossel.

Because he was able to successfully convince good-hearted pedestrians that he was poor, Stossel went on to chastise people who gave the homeless money because, in his view, “most are not…for real.”

He implored viewers to stop giving money to poor people because if you do, “you’re an enabler.”

Funny thing:  even Mediaite knew Stossel was full of crap:

Those slaps must have really hurt, though, because now, Stossel attacks people who don’t hit back, mainly because they don’t exist. According to Stossel’s report,  the only fake homeless person he turned up was John Stossel, and what’s he gonna do, hit himself?


I used to write long discourses on the perception of poverty and the "proper limits" of charity.  Now I prefer to quote C.S. Lewis, beloved of many conservative Christians for The Screwtape Letters, but not necessarily for this:

"Another things that annoys me is when people say, "Why did you give that man money? He'll probably go and drink it." My reply is, "But if I kept it, I should have probably drunk it."

Now I bring this up because to qualify for Medicaid in Texas, a single parent with three children cannot earn more than $3,737 annually.

Let that sink in for a moment.  If you are a single parent with three children and your annual income is over $311 per month, you don't qualify for Medicaid.  Period.  End of discussion.

Go to an emergency room and face the bill collectors.  And even then they'll just turn you out ASAP.

Ted Cruz was terribly upset that a CNN reporter asked him what could be done about healthcare in America.  Ted Cruz said lots of people in Texas are losing their (really really REALLY BAD!) health insurance policies because of the ACA, and that was a scandal.  He said 5 million people (nationwide) have lost their policies.  Funny thing:  1,046,430 Texans will remain uninsured because Gov. Perry refused the expanded Medicaid coverage.  But since none of those people are likely to have accounts with Goldman Sachs, or haven't lost their crappy health insurance, their problems don't really matter.

So, 1/5th of the number of people who will have to get new and better policies thanks to the ACA, instead live in Texas and will have no relief at all.

And yet Rick Perry thinks, rather like John Stossel, that helping those people makes things worse:

Texas Gov. Rick Perry (R) on Thursday compared the Medicaid expansion under the Affordable Care Act to one of the most famous disasters.

“It’s like putting 1,000 more people on the Titanic when you knew what was going to happen,” Perry said at the Republican Governors Association meeting in Scottsdale, Ariz., as quoted by the New York Times.

Disgusting?   It is beyond disgusting.  There are not words strong enough for me to express my rage against Rick Perry and Ted Cruz and the people who elect them; people who are in fact a tiny minority of the voting population of Texas; but then that means I have to be angry with the people who don't vote, and I couldn't be sure they wouldn't vote with the voting majority anyway.   And then John Stossel says that if you don't leave the poor to the tender mercies of the marketplace, you enable their poverty; as if the marketplace that made Stossel rich isn't the very market place that created the poverty which allows Stossel to be rich; which allows Rick Perry, despite a life time in Texas government, to leave the Governor's office a rich man; which keeps Ted Cruz rich and comfortable while he insists millions in Texas go without even basic medical care.

Poverty is not a natural force, like the weather; it is entirely human-made; and it is made to benefit a few at the expense of the many.

Am I my brother's keeper?  Yes.  And I am doubly-damned in that responsibility, if my efforts keep my brother in poverty.