I really didn't think it would be this easy to assemble the images.

So here's Lara Logan on "60 Minutes" on Benghazi: 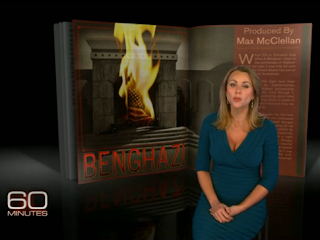 And here's Lara Logan again, on "60 Minutes" on Benghazi: 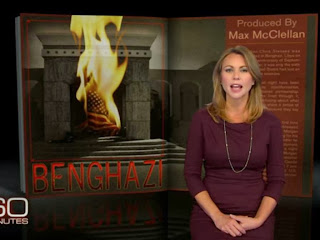 And, just for grins, here's Lara Logan apologizing for the story the first time, on CBS's morning show: 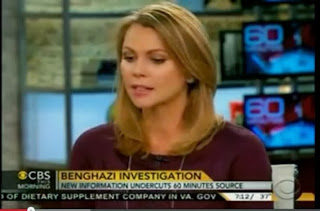 The first picture is from the original broadcast.  The second picture is from the sorry/not sorry apology.  I don't like paying attention to how people are dressed, especially because sexist and classist and other things, but does anybody think it's an accident Ms. Logan was showing cleavage on the first show (Hey!  A "sexy" news story is SEXY!) and wearing basically a T-shirt collar for her apology appearances?

Yes, her apology was a joke and her motives in the original story are questionable (Wonkette has all the details; and the link to CBS and Fox News via David Rhodes makes this story at TPM seem all the more likely, especially when you add in CBS owned Threshold Editions), and even yes, the second dress is more appropriate for a morning TV show when you aren't a Hollywood celebrity and no, I don't care how Lara Logan dresses for TV appearances, and yes, this is small beer compared to Ms. Logan's "I Want to Believe" approach to Dylan Davies, but...

Does anybody else feel played by all of this, on several levels?

It just seems a little too purposeful for me.  And it makes the whole thing, if that's possible, even sleazier.