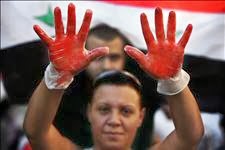 Well, that's what you get for meddling with primal forces!

President Obama will get a short-term lift for his nominees, judicial and otherwise, but over the immediate horizon, the strong-arm move by Senate Democrats on Thursday to limit filibusters could usher in an era of rank partisan warfare beyond even what Americans have seen in the past five years.

Ultimately, a small group of centrists — Republicans and Democrats — could find the muscle to hold the Senate at bay until bipartisan solutions can be found. But for the foreseeable future, Republicans, wounded and eager to show they have not been stripped of all power, are far more likely to unify against the Democrats who humiliated them in such dramatic fashion.

Because it's all Obama's fault, somehow, that Republicans are crazee!  And it's the Democrats that pushed the Republicans into being crazee!  Because everybody knows the only way to deal with crazee! is to let it have its way, or it will turn truly CRAZEE!!!

And you don't want that.  Really.  It ain't worth even the catharsis you might feel (but that feeling is, of course, an illusion):


The decision to press the button on the so-called nuclear option was no doubt cathartic for a Democratic majority driven to distraction by Republican obstructionism. President Obama had predicted his re-election would break the partisan fever gripping Washington, especially since the Tea Party movement swept Republicans to control of the House. It did not.
...
But the fever is hardly gone. The rule change lowered to a simple 51-vote majority the threshold to clear procedural hurdles on the way to the confirmation of judges and executive nominees. But it did nothing to streamline the gantlet that presidential nominees run. Republicans may not be able to muster the votes to block Democrats on procedure, but they can force every nomination into days of debate between every procedural vote in the Senate book — of which there will be many.

Really would have been better to just let the CRAZEE! have their way because while they were the minority and our system rests on the rule of the majority and elections matter and all that, still, did I mention these people are CRAZEEE!!!!!

And that Obama did it to 'em?  I'm not saying it's because Obama is guilty of Presidenting While Black, because that would imply that the Crazee are also racists, and that inference is never permitted.  But let's face it, the GOP wouldn't be so full of Crazee if President Obama and the Democrats didn't insist on acting like they ran the Senate and held the White House.

Republican senators who were willing to team with Democrats on legislation like an immigration overhaul, farm policy and a reauthorization of the Violence Against Women Act will probably think twice in the future.


See?  They'll be sorry now.  Especially since all of that legislation has passed the House, and is just waiting for the Senate to pass it on to Obama for his signature.  Oh, wait, they aren't.  They aren't even working a full two weeks between now and January 1.  The House isn't going to get anything done, if John Boehner can help it.

And now the Senate just made it worse.  Because:

Absent Senate filibusters, the anti-lynching bills of 1922, 1935, and 1938 would have become law, bringing federal force to bear against racist violence and possibly allowing the civil-rights movement to achieve its victories decades earlier; direct election of the President would have replaced the electoral college in time for the 1972 election; and nearly all Americans would now be covered by a program of national health insurance.