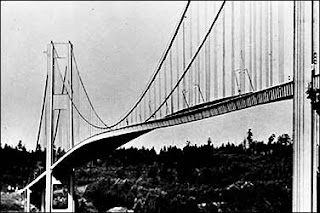 And how long had we been building bridges when this happened?

First, a note to Bill Clinton:  when Dick Cheney agrees with you, it's time to retract what you said and shut up.  And to the Democrats:  trying to essentially nationalize health insurance companies will not "fix" what is wrong with Obamacare.  And as for this "problem":

A senior Democratic aide told the Washington Post's Greg Sargent that without an administrative fix for people who are losing their existing individual health insurance policies -- which the White House is reportedly searching for -- it will be hard to maintain Democratic opposition to a House GOP bill that would seek to solve the problem.


Maybe the Democrats need to listen to Dean Baker:

First, it is important to note that the ACA grand-fathered all the individual policies that were in place at the time the law was enacted. This means that the plans in effect at the time that President Obama was pushing the bill could still be offered even if they did not meet all the standards laid out in the ACA.

The plans being terminated because they don't meet the minimal standards were all plans that insurers introduced after the passage of the ACA. Insurers introduced these plans knowing that they would not meet the standards that would come into effect in 2014. Insurers may not have informed their clients at the time they sold these plans that they would not be available after 2014 because they had designed a plan that did not comply with the ACA.


I bought one of those plans.  After the first two premium payments, we got a letter saying the plan was being cancelled, and then a letter saying the premiums were going up on the new plan.  The cancellation was not directly linked to the ACA, but it was implied (and, to be fair, the letter directed us to the national marketplace to seek out a plan that suited us better).  Why was the plan cancelled?  Because it was an individual policy that the insurer was looking for an excuse to cancel, the better to raise the rates in the new year.  That's the likeliest explanation.  We've had this experience before.  An employer-provided plan was cancelled a few years back, at renewal.  Seems the insurance company simply didn't want to deal in those policies anymore, so away it went, and new policies were more expensive with higher deductibles and premiums and more of the cost had to be shifted to the employees.  It was all perfectly fair; my wife was on the committee that looked at new insurance plans, not that they had much choice in what to look at.  But that didn't make national news or cause politicians to quake in terror, so it passed without general notice.

It has ever been thus, in other words:

In this case also it is wrong to view the insurers as passive actors who are being forced to stop offering plans because of the ACA. The price increases charged by insurers are not events outside of the control of insurers. If an insurer offers a plan which has many committed buyers, then presumably it would be able to structure its changes in ways that are consistent with the ACA. If it decides not to do so, this is presumably because the insurer has decided that it is not interested in continuing to offer the plan.

As a practical matter, there are many plans that insurers will opt to drop for market reasons that may or may not have anything to do with the ACA. It's hard to see how this could be viewed as a violation of President Obama's pledge. After all, insurers change and drop plans all the time. Did people who heard Obama's pledge understand it to mean that insurers would no longer have this option once the ACA passed?

As I say, with or without ACA, insurance companies make decisions on what plans to offer to whom, and whether or not to offer them at all.  There is no law requiring insurance companies to be in business, or to offer a product affordable to all.  One could see this as the fundamental flaw of the "Affordable Care Act," where "affordable" is largely provided by relying on employers to keep buying policies, and on subsidies to help out the middle class (the lower class is left to the tender mercies of GOP governors who won't expand Medicaid).  So once again, this is a middle class fight.*

Which apparently is scaring the likes of Mary Landrieu, who, if she had any political sense, would decry the stinginess and heartlessness of Bobby Jindal, a man who is as much a political powerhouse as Rick Perry.  In her best homage to Huey Long Mary Landrieu could point out that Louisiana is doing nothing to care for its poor and indigent, people who would get help if Bobby Jindal would accept it on their behalf from Washington.  She could also point out that waiting for a website to work is not nearly the same thing as waiting for a bridge to be designed and built, which is what one idiot "Silicon Valley" majordomo compared it to on NPR yesterday morning.

The next time a bridge design is changed by a Supreme Court opinion 6 months before it is scheduled to open, let me know.  And the first time a website collapse kills people, we can talk about websites being "infrastructure" like bridges.  Until then, that Silicon Valley guru can put a sock in it.

All of this is, as Baker says, a "Fox News Special."  Obama, Baker points out, also promised you could keep your doctor.  Many doctors have died or retired since Obamacare was signed into law; so, was that line a lie, too?

Stuff the outrage.  I'm tired of government by the loudest screamer, and politicians who jump at the sound of their own name spoken above 3 decibels. This morning the news is that only a few people have actually bought plans, although nearly 1 million people have looked into them.  54,000 from Texas completed applications, although only 3000 have purchased.  This, too, is a sign of disaster; except it's completely in line with the experience in Massachusetts under Romneycare.   People like to look before they buy.  This isn't catastrophe; this is normal.

Immigration; poverty; joblessness: we have bigger problems than a jiggy website and consumers who don't want to commit until 2014..

*The irony is the "fix" currently proposed by Sen. Udall would effectively nationalize the insurance companies by requiring  "insurers to continue policies that were in effect as of Sept. 30, 2013 until Dec. 31, 2015 if the consumers choose to renew them and meet the eligibility requirements"  Of course, "eligibility requirements" is a loophole big enough to drive a herd of elephants through, because it sounds like you're gonna have to suspend the provisions of the ACA about life-time caps and pre-existing conditions to get there, unless you just mean, can the consumer pay the rate hikes we're gonna impose?

Which is the likeliest explanation, since no way are the insurance companies gonna let Washington pass a law that doesn't allow them to make money.

And if I would add anything to what Josh Marshall said, it is that this is getting media coverage precisely because the House isn't doing anything between now and January, so there's nothing else for the DC press to obsess about.  And living in the DC bubble, Democrats are starting to crack.  "Gut check time" indeed.