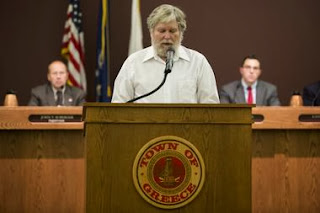 Our [non-denominational non-sectarian non-deity] who art [or art not]
in heaven [or somewhere unspecified, or just Ground of Being, or just Being but not Dasien

So I'm listening to this (ignore the comments, they're generally as mindless and annoying as you would expect), and at some point the legal scholar mentions the Supreme Court has approved "non-sectarian prayer" which apparently is prayer addressed to "our Heavenly Father" but not to "Jesus," and I'm thinking, once again:  how can prayer be non-sectarian?  And why, if it is, is it being offered at all?

There is nothing non-sectarian about that example (and whether it is dicta or a Supreme Court ruling, I cannot now ascertain.  It was presented as a ruling in the discussion, but I don't take that as final.).  "Our Heavenly Father" is, in fact, as specifically Christian as "In Jesus's name."  It is a term of address for God found only in the New Testament.  It was Jesus who told his followers to address God as "Abba," Father (closer to "Papa," actually, but let's lay that aside....).

And isn't any prayer a sectarian exercise?  Do I want to attend a legislative session like a city council meeting where a Wiccan offers a prayer?  How about a Hindu?  What if a Tibetan Buddhist stands and whirls a prayer wheel? (I mean no disrespect to Tibetan Buddhists, I'm trying to include the wide varieties of prayer offered in the world).  Would some have to burn offerings in order to make the prayer efficacious?  If we don't let that happen, are we intolerant?  If we do, does it violate the fire code?

I'm quite serious here.  The very notion of prayer as words spoken in public is sectarian.  It presumes a definition of prayer that is hardly universal, and yet in this country especially we pride ourselves on the diversity of cultures in our midst.

I'm not a fan of public prayer, to begin with.  The Senate Chaplain was also quoted in this discussion.  He said he considered the people assembled for his public prayer to be his congregation, and why would he want to offer a prayer that some of them would find offensive?  I wonder the same thing.  I learned early on giving sermons that they are not public speeches to be offered on soap boxes on the sidewalk.  They address the concerns of a particular group of people, and do so by trying to relate the word of God to them.  Obviously that's a very sectarian practice, but it's also very particular to the people gathered.  The church may be (and should be) open to all; but the sermon is addressed to one group in particular.

Public prayer is the same thing.  It is addressed less to a deity than to the gathering.  And the reasons for prayer are multifarious, too.  Is prayer petition?  Is it address?  Communication?  Offering of praise?  Seeking blessing?  Calling upon the gathered to be mindful of their relationship to a deity?

I know the Supreme Court prefers to resolve these issues according to concepts of custom and coercion (Coincidence?  Can't be!), so I'm not making a Constitutional argument; at least not in the terms the Court has set down as precedent.  But I'm really wondering:  what is the purpose of public prayer, especially in a 21st century culture like America's, and why don't we just do away with it altogether?

And then we can get on that reprehensible Presidential speech-tic of ending every utterance with "...and God bless America!"