Those who have ears had better look!

Let's not focus on this: 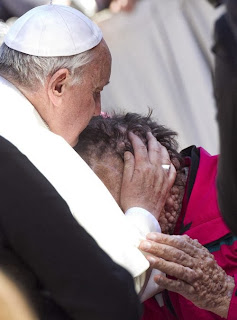 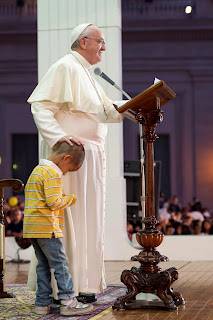 Let's focus on what was said; or, more precisely, on what wasn't said:

But Ms. Kurt recently took the Pope Francis prayer card down and threw it away. "It seems he's focusing on bringing back the left that's fallen away, but what about the conservatives?" said Ms. Kurt, a hospice community educator. "Even when it was discouraging working in pro-life, you always felt like Mother Teresa was on your side and the popes were encouraging you. Now I feel kind of thrown under the bus."


But it's worse than that!


Steve Skojec, the vice president of a real estate firm in Virginia and a blogger who has written for several conservative Catholic websites, wrote of Francis' statements: "Are they explicitly heretical? No. Are they dangerously close? Absolutely. What kind of a Christian tells an atheist he has no intention to convert him? That alone should disturb Catholics everywhere." In an interview on Friday, Mr. Skojec said he was overwhelmed by the positive response to his blog from people who said they were thinking the same things but had not wanted to say them in public. He said he had come to suspect that Francis is a "self-styled revolutionary" who wants to change the church fundamentally. "There have been bad popes in the history of the church," Mr. Skojec said. "Popes that murdered, popes that had mistresses. I'm not saying Pope Francis is terrible, but there's no divine protection that keeps him from being the type of guy who with subtlety undermines the teachings of the church to bring about a different vision."


Francis was probably born in Kenya, too.

If ever we needed evidence that the message of the Christ of the Gospels was a radical message at odds with the demands of the world, thanks be to God that evidence is renewed from time to time for all to see.

Although I will say, now I think he's just playing with us: 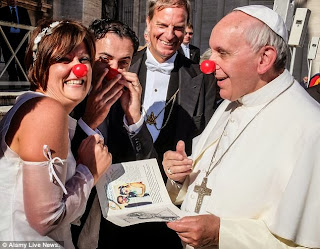 Besides, this is where it's really gonna hit the fan!

"There has to be a noticeable lifestyle characterized by simplicity and holiness of life. This is a sure way to bring our people to an awareness of the truth of our message," said Vigano, the apostolic nuncio based in Washington.

"The Holy Father wants bishops in tune with their people," Vigano said, noting that he visited the pope in June. "He made a special point of saying that he wants pastoral bishops, not bishops who profess or follow a particular ideology."


Many conservative Catholics argue that the next head of the U.S. Conference of Catholic Bishops (USCCB) should maintain the doctrinal standard the Catholic Church has upheld throughout its history — and resist the temptation to adopt a more relative theology.

“The church is not a democracy,” said Judie Brown, president of the Catholic organization American Life League. “We cannot vote on what we want to believe and what we don’t want to believe.”

And that's where the fight comes to:  is it a matter of theology; or simply a matter of emphasis?