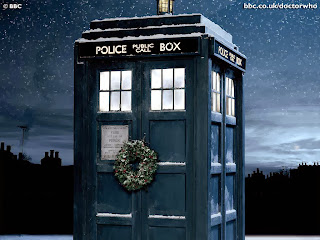 I'm pushing the season a bit, which should be against my rules; but it's my favorite picture of the famous blue box, and it will be my wallpaper again just after Thanksgiving (the wall paper on my phone is the time vortex, if that tells you anything.  One of my ringtones is the theme song, the other the sound of Tardis landing/taking off, if that tells you anything else).

My first doctor was Tom Baker.  I had a Tom Baker scarf a friend in seminary gave me; and then I lost it in seminary.  Something poetically right about that (if still a bit sad).  I have a TARDIS on my desk, plugged into my computer (further affiant sayeth not).  I've been relishing the "Takeover" of BBC America all week, luxuriating in watching as much Dr. Who as I want without having to buy DVD's (I still haven't got the hang of that, watching TV shows on DVD.  Not sure why.)

Anyway, it's the 50th anniversary today.  Not quite a continuous one; then again, the church I came here to serve celebrated its 150th year when I arrived, although it actually closed its doors for about a decade somewhere in there, and made it's own reboot.  Once, anyway.

It's still my favorite show because everything happens in Britain (instead of America!), and the Doctor always wins by being clever, not by having the most muscles or the best strategy or the newest tech.  And at the same time he's sad, blood-drenched, the last of his people, a father with no living children, a husband with no living wives, an eternal child because he is too old to be elderly.