He does know we remember this, right? 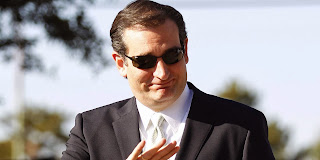 He's hiding behind more than those glasses....

"Listen, Jay, I'm one of the many people who was not a fan of shutting down the government," Cruz said. "Throughout this whole thing, I said..."

"Well you looked like a big fan from where I was standing," Leno interjected.

"I said throughout 'we shouldn't shut down the government,'" Cruz said seconds later. "And the reason we had a government shutdown is President Obama and the Democrats said 'we will not negotiate and we will not compromise.'"

Texas Sen. Ted Cruz says this month's partial government shutdown and his key role in it were a success: They got people talking.

"One of the things we accomplished in the fight over Obamacare is we elevated the national debate over what a disaster, what a train wreck, how much Obamacare is hurting millions of Americans across this country," Cruz told about 600 Iowa Republicans on Friday at the Iowa GOP's annual fundraising dinner in Des Moines.

Cruz agreed: "A significant amount of Republicans assume, with an impasse, that President Obama will never ever ever give up his principles, so Republicans have to give up theirs... If you have an impasse, you know -- one side or the other has to blink. How do we win this fight? Don't blink." Cruz tells The National Review that Republicans who disagree have Clinton PTSD — they're "haunted by ghosts of shutdowns past."


Before he was against it.  Because it was Obama's fault! 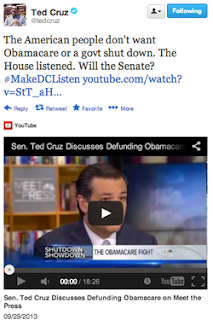 When it was over it was such a good idea, let's do it again!

Sen. Ted Cruz, the Texas Republican who pushed the strategy to tie government funding to defunding President Obama’s health care law, wouldn’t rule out revisiting it in the coming months.

“I would do anything, and I will continue to do anything I can, to stop the train wreck that is Obamacare,” Cruz said when asked by ABC News’ Jon Karl whether he would rule out another shutdown. “The test that matters Jon, is are we doing anything for all the people that are getting hurt from Obamacare?”


And why does Cruz get elected?  Mostly because nobody cares:

To understand Texas politics, an important number to keep in mind is 750,000. In a state of 26 million people, that is how many votes it generally takes to prevail in a statewide Republican primary — which is tantamount to being elected, considering that no Democrat has won statewide office here since 1994.

Democrats have not won statewide office in 20 years because they haven't put up any candidates worth voting for since Ann Richards.  That may change with Wendy Davis, despite that fact Texas voter turnout is around 36%, the lowest in the country.  GOTV is the next big fight in Texas.  Which is why we have the most restrictive voter ID law in the country.  Least popular, too.

Wendy Davis is 6 points behind Greg Abbott, and the campaigning hasn't even started yet.  Abbott was re-elected as state Attorney General in 2010.  Prior to her filibuster, Wendy Davis was virtually unknown outside of the Texas Legislature.  Can Texas' restrictive voter ID law (which Wendy Davis saved from preventing Greg Abbott and others from voting altogether) be a spark that starts a prairie fire?