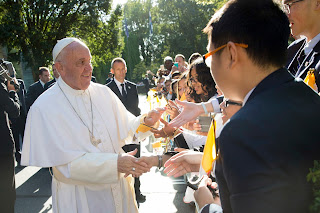 I mentioned this below, but I want to examine it a bit more fully, if only because Fr. Martin's article is an excellent example of Jesuitical rigor (which, as a lawyer, I especially appreciate).

1. Pope Francis met with many individuals during his visits in Washington, New York, and Philadelphia, at various locations and events....The pope would have been introduced to many more people whom we may never know about: individual Catholics whom a Vatican official, or a local bishop or friend of the pope, felt was especially deserving of a visit—again, these would include Catholic donors, priests, men and women in religious orders, and so on.

Got that? Kim Davis was one of many, not one alone.

2. Such meetings are arranged in several ways.... It is claimed that a “Vatican official” arranged the meeting with Kim Davis, which is vague. Does this mean someone in the Vatican curia? A local cardinal, archbishop or bishop? And why? In response to a request by the pope? Or perhaps as a way for a local bishop to encourage Ms. Davis, who, by the way, is not Catholic? (One unintended irony of this visit: I wonder what Ms. Davis’s own Apostolic Pentecostal church, which apparently does not believe in the Trinity, thinks of the office of the bishop of Rome.)

It's the last line, as Charlie Pierce would say, that raises this to art.  According to the NYT Ms. Davis' parents are Catholic; but if her own church denies the doctrine of the Trinity that puts them outside the mainstream of Christianity (ecumenical efforts have resolved the validity of baptism when it is done in the name of the "Father, Son, and Holy Ghost."  I know nothing about the AC, but do they not baptize in this formula?)

3. It’s hard to know how much the Pope Francis knew about each individual who was introduced to him during his long trip to the United States....was her story quickly relayed to him in a receiving line? And how was it explained to him? “Holy Father, this is Kim Davis who…”

So, the eternal question:  what did the Pope know, and when did he know it?

4. His words to her, “Be strong,” and his gift of a rosary seem to be the kind of thing the pope might do for anyone presented to him. The difficulty of trying to construe these words into Pope Francis’ support for a “liberal” or “conservative” political agenda is evident here. That is, he said almost the same thing to women religious in this country, sometimes widely viewed as “liberal”: “Be courageous!”

Which starts to explain the reticence of the Vatican to confirm or deny this meeting of public figures.

5. For those wondering what all of this means, it’s probably best not to interpret a meeting that the Vatican will not speak about, and also to be careful about swallowing wholesale the interpretation of those who would use this meeting to support their own agenda.

And here Fr. Martin sets aside the idea that the Pope ever supported Ms. Davis' case.  As usual, context is all, and that context is not necessarily what's in American headlines at any given moment (we are important, but we aren't really THAT important):

Instead, there’s an easier and better option. Listen to the pope’s own words on the matter, which came in response to ABC’s Terry Moran’s question during the in-flight media conference back to Rome, about individual conscientious objection.

In fact, now that we know that he met Ms. Davis, that first sentence indicates he is not in fact talking about her case in particular.

Emphasis most emphatically added.  And now we get closer to why the Vatican didn't want to discuss this meeting.

That's gonna leave a mark!  But the best is yet to come:

7. Most of all, despite what Ms. Davis said, a meeting with the pope does not “kind of validate everything.” Again, the pope meets with many people, some of whom he may know well, others of whom may be introduced to him as a reward for long service, and perhaps others who will use a meeting to make a political point. Meeting with the pope is a great honor, but it does not betoken a blanket blessing on “everything” one does. Not to put too fine a point on it, but Pope Francis also met Mark Wahlberg, and that does not mean that he liked “Ted.”


Again, to cite Charlie Pierce, you don't mess with the Society; they will f*ck your sh*t up!