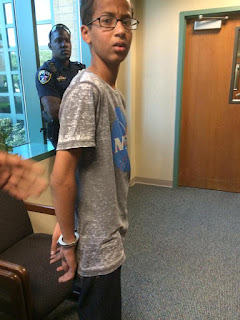 The irony is so sharp and so close to the throat you dare not move for fear of the suicide:

The outlook of mechanically-minded students of color could not have been helped by the fact that yesterday, police in Texas arrested a ninth-grader for making a clock and bringing it to school. The kid had loved robotics club in middle school and was hoping to join something similar in high school, so he brought his creation to show to his engineering teacher. But he had to carry it around for the rest of the day. When it beeped in English class, that teacher confiscated it. Then she called the cops.

On one level, this story fits inside an appalling pattern of police arresting children as young as five for offenses such as throwing paper planes in class, playing tag, and having overdue library fines. But if, on a broader plane, childhood itself is now a walking potential crime, research studies have thoroughly documented the fact that the preschool-to-prison pipeline disproportionately targets children of color.

The story of the clock-making kid gets worse, for his name is not Johnny Smith, but Ahmed Mohamed, and he is Muslim. Authorities at Irving MacArthur High School thought his device was a bomb. The subtext is clear: if the boy is a Muslim, he must be a terrorist.

Ahmed said. “I told them no, I was trying to make a clock.”

Ahmed was led out of school in handcuffs and given a three-day suspension. The Dallas Morning News reports that “police say they may yet charge him with making a hoax bomb — though they acknowledge he told everyone who would listen that it’s a clock.” The police confirm that a clock is what Mohamed claimed to have built, but according to police spokesman James MacLellan, the boy “was unable to give a ‘broader explanation’ as to what it would be used for.”


So here's what we have:  ignorant racist police pick on the brown kid because of his name (did they even ask him his religion?  Did they have to?) and it's the brown kid's fault.  By the way, how bad was it?

They led Ahmed into a room where four other police officers waited. He said an officer he’d never seen before leaned back in his chair and remarked: “Yup. That’s who I thought it was.”


As Salon notes, the case of the "bomb" is rather like the case of Dr. Xi, arrested by the Justice Department for selling secrets to the Chinese, because, well, he's Chinese!  Except they had to drop the charges because the only evidence they had was that Dr. Xi, a naturalized U.S. citizen, is Chinese.

The real trouble starts when authorities with ample power to throw you in jail happily flaunt their own ignorance.


And that sentence is when the penny dropped:  how is this any different from the professed atheism of people like Lawrence Krause?  The most fervent of the New Atheists are Islamophobic (a term they disdain, especially when it is linked to racism, because it's not about race because it's never about race).  Yet the idea that a brown kid with a "Middle Eastern" name is likely a terrorist is of a piece with atheist diatribes.  (The further irony is that the majority of the world's Muslims are Asians; yet no one automatically assumes Dr. Xi is a Muslim or, if  so that he's a terrorist.  Wrong "race," donchaknow?  But it's not about race.....)

And it's hard to find a New Atheist who knows anything about Islam or Christianity or religion in general, because they are so proud of their ignorance.

But tell me again what kind of paradise it would be if they were in charge.