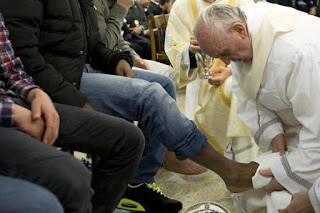 At this one he included women and Muslims

So, the "least of these" doesn't include the gai?

Huckabee was upset over Obama inviting transgender activists and the first openly gay Episcopal bishop to the welcoming ceremony for the pope at the White House. The Vatican criticized the invitations and said that photographs of the pope and these individuals might suggest approval of their decisions, according to the Wall Street Journal.


Can't get to the WSJ original, so I have to rely on TPM.  That said, this response could have come from flacks in Rome, not necessarily from His Holiness currently in Cuba.  Either way, it's an interesting response, especially in light of the Pharisees criticizing Jesus for hanging with whores and tax collectors (in 1st century Palestine, basically male whores).

I rather expect Pope Francis to be less upset than the home office or Pastor Huckabee.  And I really think both of them are so far-off base (Vatican and Huckabee, I mean), that they don't really matter.