Fear of a Brown Planet 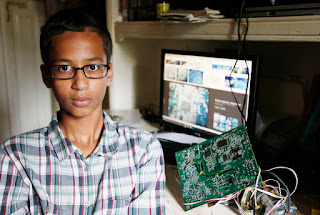 I think we're coming closer to an answer to "Why Irving?," and it ain't just because "Texas" or even "Dallas."

"[Irving mayor Beth] Van Duyne’s focus on the city’s growth earned her our recommendation in 2014. But we also urged her to build 'cooperation and unity,'" the editorial read. "She’s failed at that part of the job. An important part of Irving’s population is Muslim, and the city is home to a major mosque."

And really, it ain't limited to Texas. This exchange took place in New Hampshire:

“We have a problem in this country,” a questioner said, “it’s called Muslims. We know our current president is one. You know he’s not even an American. We have training camps growing where they want to kill us.”

Trump — who spent much of much of Wednesday night’s debate talking over and interrupting other potential nominees — didn’t even attempt to challenge this interrogator, who did eventually get around to his question: “When can we get rid of them?”

As Charlie Pierce likes to say:  "This is your democracy, America.  Cherish it."*

*By the way, are Pakistanis Asian?  Or Middle Eastern?  And are Egyptians African?  Or just Egyptian?  And why aren't Russians Asian?

It is a puzzlement.