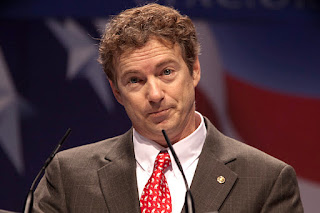 Does anybody know what Rand Paul is talking about?

"I think one way to get around the whole idea of what the Supreme Court is forcing on the states is for states just to get out of the business of giving out licenses," Paul said. "Alabama has already voted to do this, they’re just no longer going to give out licenses. And anybody can make a contract. And then if you want a marriage contract you go to a church. And so I’ve often said we could have gotten around all of this also in the sense that I do believe everybody has a right to a contract."

First, best I can tell, Alabama is still issuing marriage licenses (can't be married without one!).  Second:  marriage has always been a contract under civil law.  Marriage licenses just allow  the ordering of that contract, the registration of it, and prevention of bigamy.  It also allows the state to determine paternity, and assign responsibility for children of the marriage, as well as ownership of property from the marriage.  Which is why Alabama Probate Clerks issue marriage licenses; marriage often ends up involving probate.

So if states "get out of the business of issuing marriage licenses," what happens to all that property and family law?  Not to mention health laws and tax laws?

Is this guy really that big a moron?