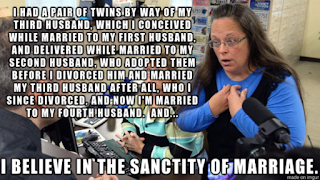 "Religion is responsibility, or it is nothing at all."--Jacques Derrida

You can get into quite a lively argument over who is a "true Christian" and who isn't.  The Pope's speech/homily to Congress has proven fertile ground for that discussion, based on the challenges he made to Congress.  It is dangerous to start deciding who is a true Scotsman, though (although that informal fallacy really isn't invoked as easily as most people think*), if only because it violates a tenet of Christian teaching straight from Jesus:  "Don't judge, and you won't be judged."  Which frankly, is simply sound advice, whether you are a theist or an atheist.

But we can set apart those who proclaim their religious faith loudly, be they Christians like Kim Davis or Muslims like members of ISIS, with the idea of responsibility as our lodestone.  Consider ISIS first:  reports are that they arrogate to themselves the right to rape women as they please, even to keep them in captivity as sex slaves for that purpose.  They certainly think they have the right to kill, dominate, and rule over others, all in the name of Islam and Allah.  Do they take any responsibility for these actions?  No.  They declare themselves justified in the name of Allah and in their understanding of Islam.

The example of Kim Davis is less extreme, but for that reason just as appropriate.  She claims that, in the name of God and her faith, she cannot issue marriage licenses to same sex couples with her name on them, and further that the state or the Governor of Kentucky must accommodate her religious belief.  She doesn't, in other words, want to be responsible for the marriage of those couples, a marriage she believes is more against God's law than any other sin she can commit (apparently), and in which she is complicit merely by the presence of her printed name on a document.

Consider the lilies how they grow: they toil not, they spin not; and yet I say unto you, that Solomon in all his glory was not arrayed like one of these. 28 If then God so clothe the grass, which is to day in the field, and to morrow is cast into the oven; how much more will he clothe you, O ye of little faith? 29 And seek not ye what ye shall eat, or what ye shall drink, neither be ye of doubtful mind. 30 For all these things do the nations of the world seek after: and your Father knoweth that ye have need of these things. 31 But rather seek ye the kingdom of God; and all these things shall be added unto you.


Those words may seem unnecessarily harsh, may seem to make too much of a demand on us, and certainly few Christians try to live by them.  But if you claim your beliefs are more important than your duties of employment, you have to take responsibility for those beliefs and seek the kingdom of God rather than the benefits of mammon.

Unless you don't really think your beliefs should lead to your unemployment, but just to letting you do what you want to do, and relieving you of what you don't want to do.  It is a question of responsibility, and who you think you are responsible to.  Kim Davis claims she is responsible to God.

But she acts as if she is responsible to her source of income.  Which is okay, most of us act that way.  But we don't get to proclaim our sanctimony and our faithfulness while denying any responsibility for acting on that faithfulness.  It's an argument of a piece with the argument of ISIS:  they aren't responsible for the consequences of their actions, they are only responsible for seeking pleasures they can justify under the claim of religious beliefs.  Kim Davis wants to perform only those parts of her job which are agreeable to her, while keeping all the authority and privileges of her position, including the full income.  She wants to ignore responsibility in the name of her religion.

But are beliefs that don't impose responsibilities on the believer truly religious, or merely convenient?  Maybe religion is practiced more for convenience than responsibility; but does that make such practices the "true" religion?  Any more than honesty is more honored in the breach than in the keeping makes honesty a falsehood we'd be better off abandoning?

*Let's just get that out of the way down here.  The "fallacy" originated this way:


Imagine Hamish McDonald, a Scotsman, sitting down with his Glasgow Morning Herald and seeing an article about how the "Brighton (England) Sex Maniac Strikes Again". Hamish is shocked and declares that "No Scotsman would do such a thing". The next day he sits down to read his Glasgow Morning Herald again; and, this time, finds an article about an Aberdeen (Scotland) man whose brutal actions make the Brighton sex maniac seem almost gentlemanly. This fact shows that Hamish was wrong in his opinion, but is he going to admit this? Not likely. This time he says: "No true Scotsman would do such a thing".

Now it is invoked whenever someone says "No Christian behaves that way," which may be a true statement.  I would agree that it's a fallacy to say "No Christian denies the atonement theory of sanctification" or "No Christian denies the inerrancy of the scriptures," because I deny both and still consider myself a Christian.  But to say no Christian behaves selfishly, or arrogantly, is to say that such a person, even if they consider themselves a Christian, is committing a sin.  And all true Christian are certainly sinners, and as such certainly commit sins.   Even the Pope has a confessor, after all.

**The secondary and more straightforward argument is that the behavior of ISIS or Kim Davis is a distinctly minority posture within the practice of either religion, and as such can hardly be said to be representative of the religion as it is practiced by the majority of adherents.