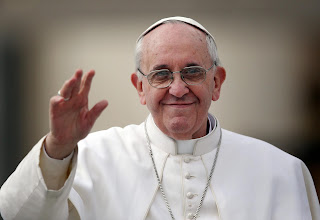 My take on this is not that of Charlie Pierce.  To the secular world, this announcement by Pope Francis can seem patronizing and paternalistic, and even the demand for contrition can seem too much.

But this applies only to Catholics, not to all women in the world.  If you want the official blessing of your church, this is what you do.  And it doesn't seem like much to me, considering we are all called, if we are Christians, to be contrite and to humble ourselves before God.

I'm a little perplexed when people think the Pope should not be Catholic, but rather should agree with them and then, if possible, be Catholic; and if not, just don't be Catholic.  It kind of ignores the reason he's the Pope in the first place.

I also think this is a great deal more movement on abortion than I ever would have expected.  Then again, having known women who were getting abortions, I understand this as I think Francis does:  as a pastoral care issue.

The Pope is determined to restore some of the pastoral office to the Holy See.  He can't be the Pastor-in-Chief to the Roman Catholic world, but he is, I think, going in the right direction.  People who seek the blessing of their church in reconciliation need to come with contrite hearts (otherwise what's the point of the blessing?  What good does it do you?).  But they also need to know their church will accept them, that the blessing and the reconciliation is available.

Seems to me that's the heart of the gospel message.