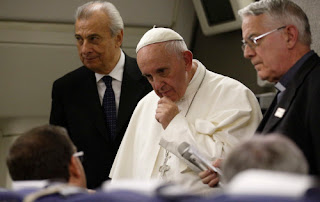 "What do members of this generation remind me of?  What are they like?  They are like children sitting in the market place and calling out to one another:

One of the Pharisees invited him to dinner; he entered the Pharisee's house and reclined at the table. A local woman, one who was a sinner, found out that he was having dinner at the Pharisee's house. She suddenly showed up with an alabaster jar of myrrh, and stood there behind him weeping at his feet. Her tears wet his feed, and she wiped them dry with her hair; she kissed his feet, and anointed them with the myrrh.

The Pharisee who had invited him saw this and said to himself, "if this man were a prophet, he would know who this is and what kind of woman is touching him, since she is a sinner."

And Jesus answered him, "Simon, I have something to tell you."

"This moneylender had two debtors; one owed five hundred silver coins, the other fifty. Since neither one of them could pay, he wrote off both debts. Now which of them will love him more?"

Simon answered, "I would imagine the one for whom he wrote off the larger debt."

And he said to him, "You're right." Then turning to the woman, he said to Simon, "Do you see this woman? I walked into your house and you didn't offer me water for my feet; yet she has washed my feet with her tears and dried them with her hair. You didn't offer me a kiss, but she hasn't stopped kissing my feet since I arrived. You didn't anoint my head with oil, but she has anointed my feet with myrrh. For this reason, I tell you, her sins, many as they are, have been forgiven, as this outpouring of her love shows. But the one who is forgiven little shows little love."

And he said to her "Your sins have been forgiven."

Then those having dinner with him began to mutter to themselves, "Who is this who even forgives sins?"

And he said to the woman, "Your trust has saved you; go in peace."

And all Pope Francis did was tell Kim Davis (reportedly) to "Stay strong!" and ask her to pray for him.

May the Lord forgive me for using the gospels as such a blunt instrument.
Posted by Rmj at 4:21 PM