You can't be too careful, or too paranoid 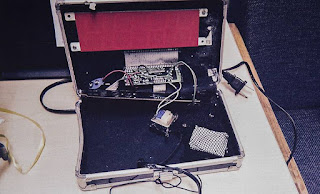 Don't know what it is, so it must be dangerous!

And since I've touched this, I'm not going to let go of it quickly:

At a press conference this morning, Irving Police Chief Larry Boyd said charges won't be filed against Ahmed Mohamed, the MacArthur High School freshman arrested Monday after bringing what school officials and police described as a "hoax bomb" on campus.

Boyd said the device -- confiscated by an English teacher despite the teen's insistence that it was a clock -- was "certainly suspicious in nature.

"The student showed the device to a teacher, who was concerned that it was possibly the infrastructure for a bomb," Boyd said.

School officers questioned Ahmed about the device and why he'd brought it to school. Boyd said Ahmed was then handcuffed "for his safety and for the safety of the officers" and taken to a juvenile detention center. He was later released to his parents, Boyd said.

"The follow-up investigation revealed the device apparently was a homemade experiment, and there's no evidence to support the perception he intended to create alarm," Boyd said.

Asked if the teen's religious beliefs factored into his arrest, Boyd said the reaction "would have been the same" under any circumstances.

And if you believe that last statement, I have some coastal land in Louisiana you'll want to buy.  Hurry, 'cause it's going fast!

Then there's the condescending "outstanding relationship" with the community-in-question argument.  I thought I'd quit hearing that when it was applied to blacks in the '70's.  And while the kid was only armed with a clock, he was handcuffed for his safety and the safety of others?

Besides, what made it suspicious?  The fact that no one could tell what it was?  Or that the kids' name was "Ahmed"?  What made it look dangerous had nothing to do with who was showing it to you?

So about that land in Louisiana.....

ADDING:  the world is shaming Irving and the school.  Whether they notice or not, Ahmed is redeemed.  And I don' t hesitate to say the teachers, the principal, the school district, the Irving police, and the Irving mayor, should be ashamed of themselves.  Not that I'm expecting them to be.....
Posted by Rmj at 1:10 PM