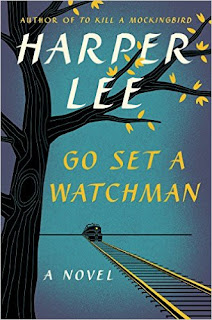 Scout is a "Tenther."

That's the real takeaway from Watchman:  Jean Louise objects to Brown v. Board of Education because she think it runs roughshod over the 10th Amendment.  It makes the novel something of a time capsule, a perfectly preserved relic of a time before Dr. King's letter and his dream transformed us all into thinking justice demanded the elimination of racism in American law.

It's telling that the only voice for the blacks is that of Calpurnia, and all she does is treat Jean Louise like the white woman with white privileges that blind her to her racism, a racism Jean Louise displays by rejecting the sight of Atticus sitting in a White Citizens Council meeting, but also by insisting that blacks should wait for change to come, not go out and meet it and bring it to town with them.

For years now I have heard the word "Wait!" It rings in the ear of every Negro with piercing familiarity. This "Wait" has almost always meant "Never." We must come to see, with one of our distinguished jurists, that "justice too long delayed is justice denied."

That argument isn't made until years later than the events in Watchman.  It is an argument unimaginable to Scout.  It is, tacitly. the argument of Calpurnia when she spurns Scout.  But even if Calpurnia could put it into words, Scout would not recognize the meaning.

Some things do take time, even if people and events can't wait.

Narratively, this is a weaker novel than Mockinbird.  Lee has a point to make in this first book, and she does it through dialogue.  It reminds me of one of Shaw's wordier plays, more intent on diatribe than on drama.  The middle section of the story, when Jean Louise wrestles with the reality of racism in Maycomb and in her family, is powerful:  it's a gut-punch to Jean Louise and to the reader.  But the resolution comes, not from drama or action, but conversation.  The last portion of the novel is one long justification, first by Atticus' brother (not a figure at all in Mockingbird) and then by Atticus.  It is satisfying neither emotionally, intellectually, nor dramatically, because in the end Scout's racism is justified in the old way:  she's not a racist, she just doesn't want her daughter to marry one.  Calpurnia's change of heart, crucial as it is to the story, is blamed not on Southern racism, but on the NAACP.

The only phrase missing from the book is "outside agitators."

But that's what makes it such an effective time capsule.  It isn't someone of my generation (born at the time Watchman is set) trying to recapture the spirit of a time lived through but not really in; it is a photograph of that period.  It is an attempt by a first novelist to capture the contradictions and what seemed like radical change of the era.  Jean Louise is distanced from her father by time as much as by geography (returning to Maycomb from New York leaves her physically displaced throughout the novel), but her arguments about state's rights and NAACP lawyers "coming down here" were already outdated by the late '60's, when Dr. King's letter (and the efforts of thousands) began to be an influence.  It's a very wrong book, in other words, and a failed piece of drama (show, don't tell, is always the first rule of fiction), but it's a good book with a compelling narrative that the author herself never quite reconciled, at least not in this story; and it points out that we probably read more into Mockingbird than we ought to.

But that should lead us to self-examination, and that is always a better purpose for fiction; even partially failed fiction can be redeemed, if we use it to reconsider ourselves.