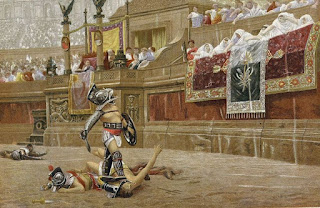 First, all these new stories about Kim Davis are taking their cues from Ms. Davis and her lawyers:

Spoiler alert:  she doesn't have to:  "The governor, the attorney general and the county attorney have said the licenses are valid. Only Davis and her attorneys claim otherwise."

“Back at square one”: Defiant Kim Davis returned to work Monday and declared that she will continue not to do her job

Basically the same article, without the notation that the licenses are deemed valid by all authorities except Ms. Davis' lawyers, who have lost every legal argument they have advanced.  No surprise, it's Salon; outrage is their marketing strategy.

TPM tends to be less lurid, but the comments are full of outrage, which is kinda surprising.  This new lawsuit sounds like something already raised before the federal court (and dismissed out of hand), so the legal team is still batting 1.000 in their attempt to never make a legal argument worth the paper it's printed on.

ThinkProgres is the only headline to get it right: It’s Over: Kim Davis Allows Deputies To Continue Issuing Marriage Licenses.  It is also less sanguine about the validity of the marriage licenses, but that's really a matter for Kentucky lawyers, so let's leave it to them.

What's interesting now is the outrage these headlines produce.  There shouldn't be a controversy here:  Kim Davis is running her mouth, but she's lost every battle she's engaged.  Same-sex couples in Rowan County, Kentucky are getting married with licenses issued by her office.  The plaintiffs got what they asked for.  The Court has her office under review to the point she's knuckled under rather than go back to jail.  Still, commentary runs heavily in favor of putting Ms. Davis back in jail permanently, if not longer, mostly on the grounds that she "deserves" it or needs to "learn a lesson" or just because she is very annoying to some people.  None of these, of course, are grounds for criminal contempt and it is likely, had the judge kept her in jail longer, the 6th Cir. would have ordered her release, giving her lawyers at least one win.

Besides, the ACLU attorneys who brought this suit argued for fines, not jail time.  Apparently they just aren't bloodthirsty enough for the attendees in the internet Coliseum.

It's a bit odd, all this screaming and yelling (virtually) over a woman who has lost every legal argument she's put forward, and has now cratered to the demands of the judge (even as her lawyers vowed defiance last week).  And especially a woman almost no on on the internet knows personally, or is likely to encounter in their daily lives.  She's bitching and moaning about the marriage certificates leaving her office, but she's not stopping them  Her case gives no solace to the handful (literally, you can count them on one hand) of clerks and judges across the country who have vowed to defy Obergefell.  The fact is, what's keeping this story alive (if you can call it that) is the outrage of certain small corners of the internet.  It's as if these petty ideologues were gladiators in some death spectacle, and nothing will do but that their opponents are obliterated from the face of the earth.

Salon, as I say, specializes in this.  In a related article this morning there was this demand:

The most reasonable Christians I know are not the voice of American Christianity. Those who love and promote a more nuanced version of the faith have a duty to get their house in order. Liberal Christians have been either ineffective or unwilling to tame the excesses in their pews.

So we are reasonable, but we aren't silencing the crazy Christians who aren't even in our pews (I've never attended a church that produced a Kim Davis), and somehow because we both call ourselves "Christians" I'm responsible for enforcing the copyright on that term, and denying it to Kim Davis?

Does this make sense to anybody else?

It's the usual internet blather and outrage, but it's beginning to sound like the Coliseum scenes in "Gladiator."  I'm not so sure Donald Trump is the only one appealing to the fears and bruised ideologies of the disaffected white American male.

As Stanley Fish puts it (whose legal analysis of the case frankly leaves a great deal to be desired; it reads like a legal analysis written by an English professor):


Some posters castigate Davis for being self-righteous; but if there were a self-righteousness competition, Davis's critics would win it hands down.

I think that particular disorder is more widespread and less generational than is generally acknowledged; on the intertoobs, at least.